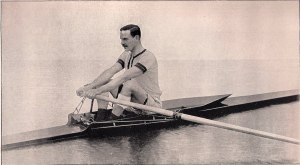 Two of the most famous rowing brothers in Britain are without doubt Vivian and Guy Nickalls. Of the two, Guy (1866-1935) got most attention by contemporary press, mainly because of his frank ways and for being outspoken, which would get him in constant trouble, both at home and abroad. Vivian Nickalls (1871-1947), who was the younger of the two brothers, was maybe not as successful as an oarsman, but through the years he would collect an extensive amount of medals, cups, and awards.

Vivian took the Diamond Challenge Cup at Henley in 1891. He also won the Wingfield Sculls in 1892, 1894, and 1895 (the latter year is when the photo above is taken). Vivian was very successful at Henley in the Silver Goblets and Nickalls’ Cup, winning the Cup in 1892 and 1893 with William A.L. Fletcher, and with his brother Guy in 1894, 1895, and 1896. In 1895, to celebrate his two sons second win together in the Silver Goblets, Tom Nickalls donated the Nickalls’ Challenge Cup.

Both Nickalls brothers would later in life go to the USA to coach rowing. While Guy would coach Yale – “Their paddling is bad, their rowing, worse.” (about his 1916 crew) -, Vivian would coach the University of Pennsylvania and the Detroit Boat Club. Both Vivian and Guy returned to Britain to serve in the Army during First World War. They would also write to highly entertaining autobiographies, Vivian’s Oars, Wars and Horses (1932) and Guy’s posthumous published Life’s a Pudding (1939).