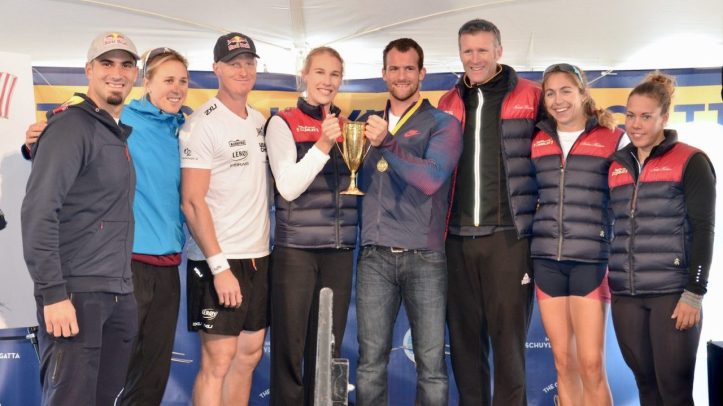 The event builds on the Gold Cup Foundation’s mission to raise the profile of sculling around the world, in part by supporting elite athletes’ training and development financially through the recognition of premier sculling events with prize money.

In 2011, the Foundation re-established an international single sculling competition in Philadelphia called The Gold Cup, in which four of the fastest male and female scullers in the world compete in a 750-meter sprint race for the title of world’s fastest single sculler and $10,000 in prize money. Recent winners of the Gold Cup race have gone on to medal in subsequent Olympic Games.

To encourage the development of elite U.S. single sculling, in 2017, the Foundation also introduced a triple crown event for American rowers called the Lotman US Challenge, with the hopes of encouraging more U.S. rowers to take up two oars and represent the country on the winners’ podium at international competitions. American single scullers Felice Mueller and John Graves took the first place prize of $9,000 in the event’s inaugural year.

THE GOLD CUP TRIPLE CHALLENGES, open to athletes across the globe, will further raise the prominence of single sculling among the world’s best athletes.

Bill McNabb, chairman of the Philadelphia Gold Challenge Cup Foundation, said: “We’re passionate about supporting elite rowers and believe that THE GOLD CUP TRIPLE CHALLENGES will inspire a new generation of athletes to focus on single sculling, and expand the fan base for sculling with the exciting prospects of a triple-winning champion.”

THE GOLD CUP TRIPLE CHALLENGES is underwritten by CFC Underwriting provided by Roehrs & Company of Assured Partners. To qualify for the cash prize, rowers must compete in and win first place in all three of the selected single sculling events. The first will be The Diamond Challenge Sculls and The Princess Royal Challenge Cup single sculls races at Henley Royal Regatta, to be held from 4 to 8 July 2018. This will be followed by the World Rowing Championships held in Plovdiv, Bulgaria, from 9 to 16 September 2018, and the Gold Cup race, held at The Head of the Schuylkill Regatta in Philadelphia on 27 October 2018.

About the Philadelphia Gold Challenge Cup Foundation
The mission of the Philadelphia Gold Challenge Cup Foundation, a 501©3 nonprofit, is to promote and educate about the sport of single sculling on an amateur level among the general public, particularly youth, by hosting annual competitions, educational programs and scholarships. The flagship competition held by the Foundation is The Gold Cup race. The Gold Cup race is deeply rooted in Philadelphia tradition and history, with the solid gold cup and race created in the 1920s to honor the achievements of John Kelly, who won the gold medal for single sculls in the 1920 Olympics. In resurrecting both the Gold Cup trophy (found in an antique shop in the 1990s*) and the race itself, the Foundation is encouraging rowing among all types of people. Private contributions from rowing enthusiasts and Philadelphia-area corporations help fund outreach by the top-level athletes to area high school and middle school children and have funded a rowing program at a middle school in North Philadelphia. Through the rowing programs and the athlete outreach, the Foundation’s goal is to develop a passion for rowing, athletics and healthy lifestyles at a young age, while also promoting sculling on an international stage.

*HTBS was the first media outlet to the break the news that the Cup had been purchased by Herb Lotman, founder and President and CEO of Keystone Foods in Philadelphia. See here.