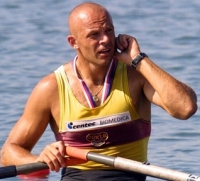 Last Saturday, 26 May, the International Rowing Federation, FISA, presented rowing’s highest distinction, the 2012 Thomas Keller Medal, to the sculler Vaclav Chalupa, not only a legend in his home country the Czech Republic, but also in the rowing world. Chalupa was awarded the 18-carat gold medal at the “Lucerne Rowing Night”, a regatta gala dinner held during the 2012 Samsung World Rowing Cup II in Switzerland.

FISA writes on their website: “Chalupa made competitive rowing his life. A veteran of five Olympic Games, Chalupa spent the majority of his 20-year rowing career racing in the men’s single sculls. His Olympic silver medal, won at the Barcelona 1992 Olympic Games, his five World Championship silver medals (from 1989, 1990, 1991, 1993 and 2009), and three World Championship bronze medals (from 1995, 1998 and 2001) drove him to continually strive for the elusive gold. He would strive for over two decades and during that time became known for his modesty, selflessness and enthusiasm for the sport.”

Chalupa, known to have been a fighter on the race course, but a gentleman off the water, actually never won a gold medal at a World Championship or at an Olympic Regatta. During his many years competing, he mostly had to struggle on his own with little support from his country. However, Chalupa’s fighting spirit inspirited other Czech rowers of today of whom the most famous are Ondrej Synek, world champion in the men’s single sculls in 2010, and Mirka Knapkova, world champion in the women’s single sculls in 2011.

Last week, another distinguished award was presented at Harvard University to Crimson Head Coach, Harry Parker, who received the Harvard Medal for his extraordinary service to the university. Parker has served as rowing coach at Harvard for 50 years! Read more here.