Ran Laurie and Jack Wilson: 1948 Olympic champions in the pair.

To get you – if you are a rower in England that is – in the right mood for the upcoming Olympic rowing this summer, the River and Rowing Museum in Henley-on-Thames will open a new exhibit on 31 March, “The Perfect Rower – 100 Years of Racing for Glory”, The Guardian reported the other day. The exhibit, which will run until 30 September, 2012, will concentrate on the two previous Olympic rowing regattas held in Henley, in 1908 and 1948. 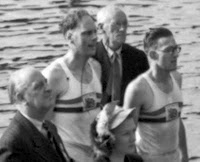 There will be information and stories about former British rowing heroes, who raced at these two Games. At the 1908 Olympic regatta, all the gold medals went to Great Britain, so for sure there will be artefacts on display about for example Don Burnell and F.S. Kelly who rowed in the Leander crew called the ‘Old Crocks’.

At the 1948 Games, Great Britain took two golds, in the double sculls and the coxless pair. These two masterly Olympic championship crews, who HTBS has written about on several occasions, were Ran Laurie and Jack Wilson (the pair) and Dickie Burnell and Bert Bushnell (the double; picture on the left). Rowing historian Chris Dodd, who has worked on the exhibition, is interviewed in the article in The Guardian. Read it here.

Then, between 26 May and 12 August this year, the River and Rowing Museum will also have an exhibit up and running about rowing artwork, “Oarsome – The Art of Rowing” by Tonia Williams, who HTBS wrote about in January, 2012.