Racing a crew from Molesey who were 3rd in last week’s Head of the  River Race but were defeated in two hard races by Oxford a fortnight  ago, it was important for Cambridge to put down an emphatic marker  during this fixture.

In a busy race for the umpire, the Light Blues led Molesey by 1 ½  lengths at the St Paul’s School finish (just through Hammersmith  Bridge). There followed a second race starting below Chiswick Eyot. At  the Boat Race finish near Chiswick Bridge, Molesey won by ¼ length but  Cambridge had earlier been obstructed by a cruiser near the Bandstand. 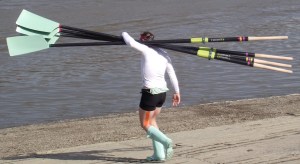 American Jack Lindeman, who once was struck by lightning.

Looking at McConnell’s report  for the Molesey–Oxford race two weeks ago it seems that the Dark  Blues won by greater margins on that occasion. How much significance  can be read into this is debatable.

Thirty miles away, the ‘Henley Boat Races’ were held on the same day.  The Heavyweight Women’s Race and Lightweight Men’s Race were won by  Cambridge while Oxford’s Lightweight Women and Heavyweight Reserve  Women were victorious in their events. Details are here.