Holmes And Redgrave, A Marriage Made For Gold 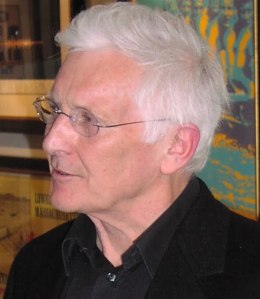 A memorial service for Andy Holmes took place at his old school, Latymer Upper, yesterday, on Saturday 20 November. His Olympic partner, Sir Steve Redgrave, describes their true relationship to Christopher Dodd, who is writing this exclusively for HTBS.

The sudden death of Andy Holmes on 24 October sent shock waves round the rowing world, not least at Karapiro in New Zealand where the world championships were in full swing. Holmes was Sir Steve Redgrave’s first Olympic partner and he played a pivotal role in the revival of Britain’s international rowing fortunes in the 1980s.

Holmes and Redgrave raced with Martin Cross and Richard Budgett in the coxed four that put British rowing back on the Olympic gold standard at LA in 1984. In 1986 Holmes and Redgrave won two Commonwealth golds and the world title in coxed pairs, and in 1988 they went on to win gold and bronze respectively in the coxless and coxed pairs at the Seoul Olympics. Before they arrived in Korea, however, their relationship had been branded as a failed marriage, and this reputation passed into lore.

In 1989 Redgrave was determined to continue, but Holmes had had enough. In May, just as the four he was rowing in won a medal in Duisburg, he abruptly turned away from the sport. Since then his self-imposed smoke screen has obscured his contribution, until he re-emerged three years ago as coach to Furnivall Sculling Club in Hammersmith and Langley Academy in Slough.

Redgrave blames a national newspaper for starting the hare of the pair’s bad personal relations, a chase swallowed whole without question by much of the media. 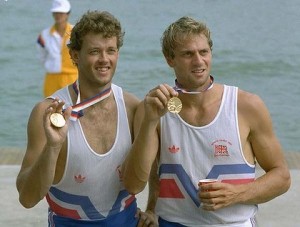 “I never had an argument or a big disagreement with him about anything. Same with Matthew [Pinsent] really. I had one fight with Andy and one slagging match with Matthew. The fight occurred in a training session when we were playing five-a-side football. Skill was not fantastic. The ball got trapped in the corner and I was hacking at Andy’s feet to try and get it out. We came out of the corner locked together and the ball was still in the corner. And that was a good three or four years before we rowed with each other.”

They had problems of a different sort before the Seoul Olympics when their coach, Mike Spracklen, decided to change the rigging of their boat after they lost at an international regatta. Then Andy cracked a rib and they couldn’t race at Henley or at the pre-Olympic regatta. “There were all these stories to write, and they came out with a piece saying we didn’t socialise with each other. Andy was living in Thornton Heath and I was living at Marlow. There was an hour and a half’s driving between us. Winters we used to train at Hammersmith and summers at Molesey because it was the halfway point. We used to come down training for two sessions a day and disappear afterwards. He was married and had his first child. I was single for most of our time together. The whole media picked that up, that we used to hate each other.”

“But,” says Redgrave, “there’s no getting away from it, Andy was a strange character.”

Holmes was notorious for not turning up to training sessions if he felt the boat was not going well. “At one international regatta when he was in the eight he didn’t turn up at the airport because he decided the boat wasn’t good enough. But when I rowed with him he was never late for training. He always had a good reason for missing a session.”

Their pairs’ partnership was forged in a pizza restaurant near Hampton Court Bridge. Redgrave continues, “Mike [Spracklen] had talked to Andy because he was interested in coming back for the Commonwealth and world titles to add to the Olympic one. That was a big thing for Andy. He wasn’t interested in watching sport on TV. It was all about him doing it, and if he wasn’t doing it he was not watching it, and if he was doing it he wasn’t going to watch anyone else doing it. The only other thing he was into was karate. He used to love martial arts.”

Holmes kept himself to himself. At training camps, Redgrave says, he always had his head in a book, usually a book in French. “All he talked about was French culture and French life. He was a deep thinker and a very bright guy, and we got on professionally really well with each other.”

Holmes had other talents, too. “At my engagement party, Andy came up to me halfway through the evening and he said ‘Do you think the drummer would let me have a go?’ He turned out to be a very, very good drummer. I’d been rowing with him for three years and never knew.”

As president of British Rowing, Redgrave was pleased to see Holmes returning to coach on the Thames. “I always knew that Andy could give something back.” They met by chance on the towpath at Henley last year when Redgrave and his fellow steward and partner for three Olympics, Sir Matt Pinsent, were doing aligning duty at the start. “I last spoke to him in 1989. It was really good to see him, and there was no bad feeling between us. Matthew told me last week how nice it was that the three of us had spoken together.”

The real tragedy, Redgrave said as he was preparing to commentate on the strongest British rowing team ever fielded, with finalists in every Olympic boat class, is that Andy will never know the esteem in which he was held.

See also Getting to Know Andy Holmes in RowingVoice 4:6c.

My warm thanks to Chris for his very interesting contribution!