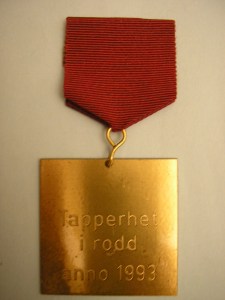 Talking about rowing medals, to be really honest, during my active time as a competitive oarsman in Sweden, I did not win any grand pots or medals. I did, however, on a few occasions, receive marks of honour for valuable work in the service of the sport on club, regional, and national levels.

Above are two of the medals I received. The one on the right is my club’s highest honour, Malmö Roddklubb’s gold medal, showing the seal of the city of Malmö, and the band in the colours of the club, blue and white. One of the regulations for this medal is that it can only be given to someone who has received the bronze and the silver medals, but in my case, it seemed, the club committee made an exception.

Earlier the same year, 1993, I received the medal on the left, För Tapperhet i Rodd anno 1993 for my work with the Boat Race between the Universities of Lund and Uppsala. This race is equivalent – well sort of – to the races between Oxford and Cambridge, or Yale and Harvard, as it is between the two oldest universities in Sweden. Before this year, the medal (‘For Bravery in Rowing in [the year] 1993’) had never been handed out, nor has it been offered to anyone thereafter. Of course, this piece of tin is an academically feigned curiosity that different intellectual, literary, sport, etc. groups at the University of Lund furnish among the students and researchers.

The medal was handed out to three of us chaps who had coached the crews, organized the race, supplied the boats and the manpower to see that the race was accomplished without any obstruction, and to raise awareness on a high university level which allowed us to end the race day with an ostentatious tail-coat banquet at the Academic Society’s ‘castle’ in the middle of the medieval small town of Lund. After dinner, and rather tipsy, I have to admit, I received the medal in the men’s loo, together with my two accomplices.