‘Rowing is a Metaphor for Life’

On Saturday, 14 May, Göran R Buckhorn swapped hats from his normal HTBS editor’s hat to his HTBS publisher’s hat when HTBS poet Philip Kuepper made his debut signing copies of his A Sea To Row By – Poems. Göran writes:

Last Saturday was a beautiful day in Mystic, Connecticut. At noon, Main Street in downtown Mystic was packed with people, mostly tourists, dressed in their summer best: t-shirts, shirts outside their trousers, shorts and light dresses; and sandals or flip-flops on their feet – all typical American summer wear in New England.

This was a perfect day for a book signing at the local village book shop, Bank Square Books, on West Main Street and luckily the person signing books in the bookstore was Philip Kuepper, HTBS’s own ‘rowing poet’. Philip’s debut book, A Sea To Row By – Poems was published earlier this year and on Saturday he made his book signing debut to great acclaim and satisfaction – for himself and for his publisher.

For the two-hour signing, Philip was fortunate to get a table close to the open door so a cool breeze could give him comfort while he was signing. As the ‘publisher’ of Philip’s book, I felt obliged to show up for the signing to give Philip support, but it was not really needed; he acted like a real author’s pro and signed copy after copy without the slightest hesitation. 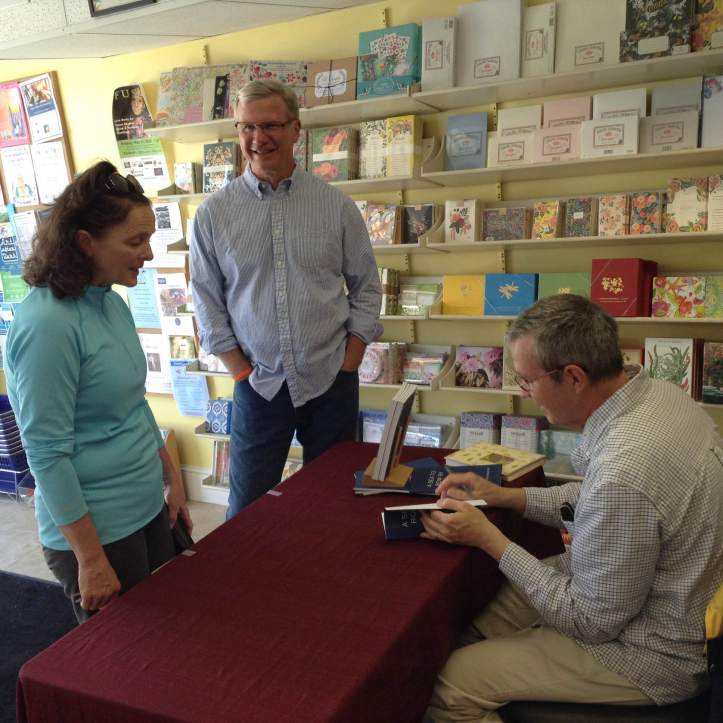 A couple was there promptly at 1 p.m., when the signing started, and then it just rolled on. Fortunately for the sale of the book, a book club at a local church in Mystic, St. Mark’s Episcopal Church on Pearl Street, had decided to pick A Sea To Row By – Poems for a book discussion, so quite a few members of the congregation showed up to get their copy. Also Rev. Adam Thomas, of St. Mark’s, showed up to buy a couple of copies for the church.

A few of the Mystic residents who came to buy Philip’s book wanted to back their local poet, not only by buying one copy of the book, but two or even three copies – now, these are the kind of people who understand how to support and encourage a local bard! And as the kind fellow he is, Philip took time to talk to each and every one who approached the table where he was sitting, for a little small talk and to take a closer look at his book. When he got the question ‘Why a poetry book on rowing?’, Philip answered: ‘Because “rowing” is a metaphor for life’. 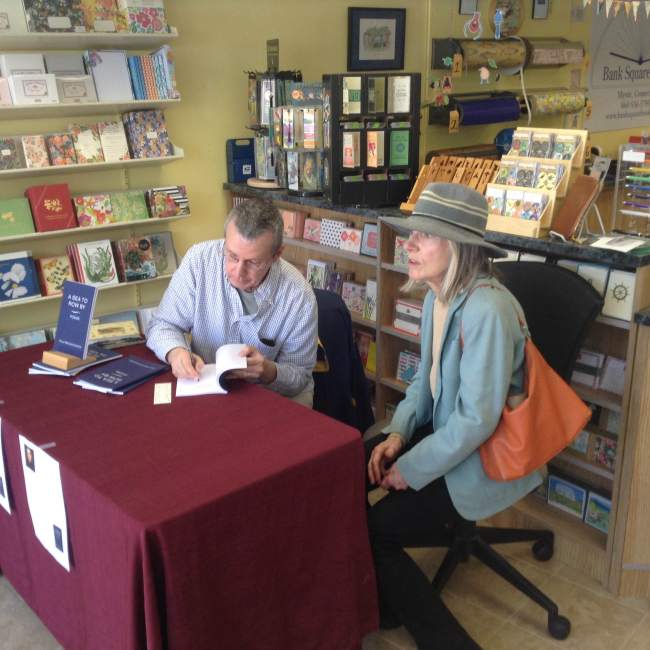 One of Philip’s co-workers at Mystic Noank Library showed up for a chat and to buy her copy of the book. She mentioned that she had read the Thursday interview with the poet, and she absolutely is of the opinion that Philip should go to Henley Royal Regatta to take in the atmosphere there himself. Though, she has never been to Henley, her father rowed there as a young man and had told her stories of the regatta. After having been at Henley myself, I can only agree: Go East my Man, Go East – to Henley Royal!

Bank Square Books is a wonderful independent book shop in Mystic. It has plenty of space and a helpful, friendly and knowledgeable staff, and it is my absolute favorite bookstore in New England. There are more or less bookstore activities going on every weekend, sometimes more than one event, from book signings, author talks, book discussions, and at other locations: author’s luncheons and much more.

Since a month back, the owners of Bank Square Books are also operating another book shop, in Westerly, just on the other side of the state border in Rhode Island. Once upon a time in that location, 10 Canal Street, was the Savoy Hotel, whereupon the bookstore is now called, Savoy Bookshop and Cafe (yes, it has a lovely café on the second floor of the store). The 2,500-square-foot store has wood floors, reading nooks and corners with comfortable leather chairs.

Neither bookstore is to be missed if you ever visit the Mystic-Westerly area.