HTBS editor Göran R Buckhorn had a nice chat with Philip Kuepper, the HTBS Poet Laureate of Rowing, for the upcoming book signing of his A Sea To Row By – Poems at Bank Square Books in downtown Mystic, Connecticut, on Saturday, 14 May.

After a week of bad weather, finally the sun came out in Mystic, Connecticut. It was a pleasure to go downtown Mystic where Philip Kuepper and I had decided to meet for a lunch chat at Bartleby’s Cafe on West Main Street. We arrived at the café at the same time and, as we were there a few minutes before lunch time, the place was entirely empty of customers. We ordered coffee (for Philip) and tea and a chicken sandwich (for me) and sat down in two comfortable chairs in a corner of the café by a window facing the street. Looking out the window, across the street is Bank Square Books where Philip is going to sign his book A Sea To Row By – Poems on Saturday. 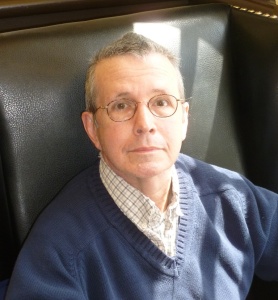 I have known Philip since 2004 when our paths crossed at Mystic Seaport Bookstore, at that time the largest maritime book shop in America. I was leaving the bookstore while Philip was taking over my position. It was easy to like Philip; he is a nice, friendly and intelligent fellow, and he is obviously interested in books and literature. He and his partner Michael ‘Mike’ Meyer had moved to Mystic the previous year from Stamford. A Sea To Row By – Poems is dedicated to Mike, ‘My North Star’, as it says in the book. In 1971, Philip and Mike met at a publishing meeting in Manhattan, and they became a couple the following year.

Philip, who carries his 68 years with ease, grew up in in Burlington, Iowa, by the Mississippi River. When I asked him when he became interested in poems, he smiled and said, ‘I was in 2nd grade and we were reading Sir Walter Scott’s Marmion’. With his soft voice, Philip recited two famous lines:

Oh, what a tangled web we weave
When first we practise to deceive!

Philip continued: ‘Scott’s Marmion made me interested in poetry, but maybe not in writing poems. After all, I was only eight years old. Writing poems came later, as a teenager in high school’. It was there and then, Philip decided he wanted to write poetry – become a poet. He also longed to get away. ‘Burlington was small and, yes, maybe a good town to grow up in, but I really felt isolated there,’ Philip said.

When Philip later studied at St. Ambrose College in Davenport, Iowa, his good friend Bill Clendenen came back after a summer vacation, telling Philip that he had gone to Boston during the break. Bill told Philip he had to see Boston. After he was done with his studies at St. Ambrose, Philip bought a ticket to Boston – and Iowa was history.

In Boston, Philip began working at the famous Brentano’s bookstore. He would later work in Brentano’s bookstores in San Francisco and New York City. In 1975, at the age of 27, he felt ready to try and get some of his poems published. He was aiming high and sent one to Poetry and another one to The Washingtonian Monthly, two prominent magazines – both poems were accepted.

When asked how he writes his poems, Philip took a sip of his coffee before he answered: ‘I write them by longhand, I always have. I find typing poems on a typewriter distracting. A computer is hard on my eyes.’

‘Have you always felt an urge to get your poems published?’ I asked. ‘Yes,’ Philip replied, ‘I want my poetry out there, to be read by people. I see my writing as a way to reach out to people, going for their souls. It’s easier for me to write than to communicate with someone face to face.’ He continued: ‘I love the sound of words and their rhythm. Take for example a poem that was posted on HTBS recently, “The Whisper Vesper”. I like the “whisper” and “vesper” sound’.

I asked Philip if he writes a poem every day? Again he smiled and said, ‘I actually write more than one poem a day, sometimes up to five, or more’. So, does he just sit down and produce a poem? ‘I start my day with an early morning walk, and during my walk I am very sensitive to what is happening around me. I get ideas during my walks. If I, for example, see rowers on the Mystic River, then when I come home, I sit down and start writing, and the poem writes itself, more or less. Writing poems comes easy to me. It is different with prose; I absolutely cannot write prose. The rhythm in prose, I find impossible to capture.’

‘Is it different to write a rowing poem versus an “ordinary” poem,’ I asked? ‘Yes,’ Philip said, ‘in a way. A rowing poem is more a narrative; there sometimes is a story in it. If “rowing” is the subject in a poem, then that becomes the anchor around which everything revolves.’

So, how many poems has Philip written since he started writing poetry as a teenager? ‘I actually count every poem I write,’ he remarked. ‘At this point, it’s slightly more than 40,000 poems’. An impressive labour, to say the least!

When we finished our coffee and tea, we left Bartleby’s and crossed the street to Bank Square Books, so I could take one more photograph for this article. Philip confessed to be a little nervous for the signing. To be in the public’s eye is not his forté.

Wrapping up our little chat, I asked Philip what he wishes for at the upcoming book signing on Saturday at Bank Square Books. ‘To sell books,’ he said. As the publisher of the book, I can only agree.

Philip Kuepper will sign copies of his A Sea To Row By – Poems on Saturday, 14 May, between 1 p.m. and 3 p.m. at Bank Square Books, 53 W Main Street, Mystic, Connecticut, phone: 860-536-3795. The bookstore will happily take your order over the phone, put a copy aside or send you a signed copy of Philip’s book. Read more about the book signing here.