Racing in Ireland in the mid-1940s: Fit Young Men

The other day, HTBS received an interesting e-mail from Henry Law. After reading an article by Greg Denieffe on William Evelyn Wylie and the Wylie Cup, which was published on 24 April (the 100th anniversary of the Easter Rising in Ireland), Henry got inspired to dig out two old photographs of his father’s, who raced in the Wylie Cup. Henry writes:

I was most interested in Greg Denieffe’s recent article “A Shadow of Cloud on the Stream” about William Evelyn Wylie. Not only was it interesting per se, but it interested me particularly because I have known of the name Wylie in a rowing context all my life. My father Kenneth Fraser Law (1924-2014) rowed for Dublin University Boat Club (that is, Trinity College, Dublin) throughout his time there, and was in the DUBC crew that won ‘The Big Pot’ (the Irish Amateur Rowing Union Challenge Cup) at Athlone in 1945. The latter occasion was immortalised in our family history by the fact that he and a crew mate, having attended the Regatta Ball, got on their bikes and cycled 70 miles back to Dublin, arriving early in the morning just in time to sit their final examinations. He passed; they must have been fit young men.

Danny Taylor, whose signature is on the 1945 Wylie Cup dinner menu (in Greg Denieffe’s article, and above), was for a number of years both sporting rival and friend to my father, and it was he, in fact, who introduced my parents to one another in Belfast a couple of years later. I also see on the programme the signature of J.A.K.O. Wilson (always and obviously known as ‘Jako’), who was the first person to win The Big Pot four times, according to Micheal Johnston in his history of that trophy, The Big Pot the Story of the Irish Senior Rowing Championship, 1912- 1991, published in 1992. 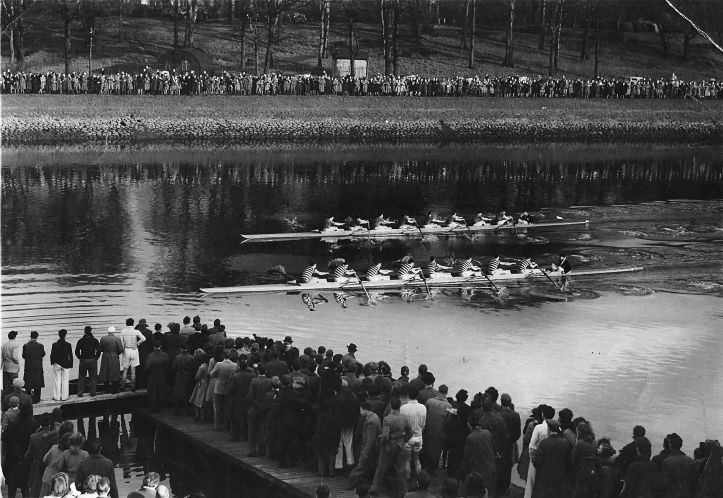 I’m attaching two photographs of a Wylie Cup match which my father annotated on the back ‘Wylie Cup, Lagan, 1946’ (Lagan implies Belfast, which is situated on that river). My father is at 4 in the picture of what looks like the start (see photograph on top), but careful study of the second, long-shot picture (above) suggests that it’s of a different race. The Wylie was won by Queen’s in 1946, but in that shot, it’s a DUBC crew that is in front, and neither crew looks to be composed of first-class rowers: I wonder if, in fact, the shot is of a different race that same day, perhaps freshmen novices?

As to the content of the photographs themselves, look at the layback! And isn’t it interesting how many people, mostly locals, presumably, were prepared to turn out to watch a university rowing race in those days.

Editor’s note: If you are interested in Irish rowing, go to Irish Rowing Archives, a wonderful website founded by its curator Kieran Kerr. HTBS’s Greg Denieffe has written an article about these archives, read it here.