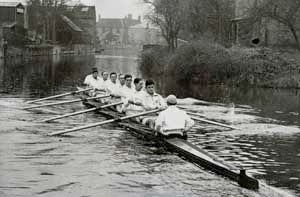 The 1944 Cambridge crew goes out to the start. Photo: “Diamond44” website.

Here on HTBS we are not really done with the 1944 boat race between Oxford and Cambridge, which was held on the River Great Ouse and which we wrote about in a post yesterday, 70-Year Anniversary of an Unofficial Boat Race.

HTBS’s Greg Denieffe wrote in a Comment on yesterday’s post about a film made by a group called The Diamond44. Greg writes, ‘“Diamond44” was set up in 2002 by Terry Overall and was (and still is) dedicated to celebrating and documenting the 1944 University Boat Race and to organising a re-enactment of the 1944 race in February 2004 on The River Great Ouse.’

There are some interesting information on this project’s website, showing photographs both from 1944 and 2004, a short film from the 1944 race, etc. Go to the website here.

HTBS’s ‘other man’ across the pond, Tim Koch, dived into British Pathe’s film archives and found three films from the ‘unofficial boat races’ in 1940 at Henley-on-Thames, 1944 on Great Ouse and 1945 at Henley-on-Thames. Enjoy the films below: