Going Underground with the Boat Race and Boat Racing 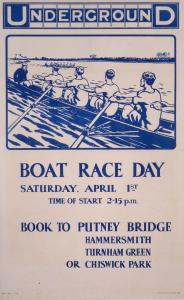 In a post called ‘Don’t Miss…’ on the 11 January 2013, HTBS reported about an exhibition at the River & Rowing Museum, Henley-on-Thames. The exhibition, ‘Stuck Up – Early 20th Century Thames Poster Art’, has now ended, but it did contain a number of London Underground posters depicting The Boat Race.

On 9 January, 2013, London Underground celebrated 150 years since the first underground journey took place between Paddington and Farringdon on the Metropolitan Railway. Through posters by some of the finest artists of their day, the Underground became the people’s gallery and thanks to the London Transport Museum on-line collection we can view most, if not all, the posters produced to promote The Boat Race.

The first Underground Boat Race poster came out in 1911 and was a simple blue on white print by Charles Sharland. The on-line collection gives details of the artists, printers and formats of the posters commissioned and you can even purchase photographic reproductions of all but a few of them.

This year’s Boat Race is on Sunday the 31 March at 4:30 p.m. The only poster matching that date that I could find was for the 1928 race. Reproduction posters and postcards of this print are also available on eBay.

The posters of the 1930s were some of the finest produced and some like the one for 1934 actively encouraged Londoners to take sides, although it could just as easily be blondes verses brunettes!

Some Boat Race posters also promoted the Head of the River race and in 1938 and 1939 the ‘Head’ had its own posters which you will find here.

Although the poster was issued in 2005, in promoting the successful bid for the 2012 Olympics, it in a sense completes a century rowing posters on the London Underground.

One of my favourite posters is in fact quite plain when compared to those produced between the two world wars, but nevertheless it did what it was designed to do: get people using the London Underground. It was for the World’s Professional Sculling Championship race held on the 21 July, 1913, between Ernest Barry and Harry Pearce and was also by Charles Sharland. HTBS reported on this race in an article called A Gentleman on the Towpath. There will be plenty of people on the towpath on Easter Sunday when Oxford take on Cambridge in this year’s Boat Race. Let’s hope they all stay out of the water!