Last Sunday, 29 July, an anniversary was held to celebrate the Leander eight and their coach who took a gold medal at the 1912 Stockholm Olympic Games. One of the descendants, Victoria Fishburn, granddaughter of Leslie Wormald, wrote a two-part article for HTBS about the Leander oarsmen and how it was to organise the 124-people strong get-together, “Stockholm 1912 – London 2012: An Olympic Centenary”, Part 1 & Part 2. Here Victoria follows up with an article about how the party went. The beautiful photographs showing unique rowing memorabilia are taken by Will Houston, great grandson of Stanley Garton. HTBS would like to thank them both for sharing the event with our readers.

It was a typical English Sunday, a mixture of sunshine and thunderstorms, when 124 people, all connected to each other by having ancestors in the Leander boat who took an Olympic gold medal one hundred years ago in Stockholm, got together to celebrate. An old-fashioned pole marquee, swathed in Leander pink, welcomed the crowd of descendants who ranged from an 88-year-old to a 3-week-old. They brought with them their ‘family gods’ in the form of rowing memorabilia. Four of the Olympic gold medals arranged in cabinets, frames and on silver cups, leather photograph albums of the crews of the early twentieth century, blades of oars, photographs and articles and even one preserved Olympic wreath awarded to Leslie Wormald. The eight oarsmen, the cox and the coach were reunited in this tent with their descendants marvelling at the collective talent on display.

Pots and medals which once belonged to the successful oarsmen who rowed for Leander, representing their country in the eights at the Stockholm Games.

Pimm’s and Elderflower lemonade was followed by a lunch of Coronation Chicken, an English summer favourite, meringues and strawberries at long white trestle tables decorated with flower pots of sweet peas. Then one of each of the rowing families got up to speak movingly about their father, grandfather or great grandfather. They gave poignant accounts of their forebears, telling the stories on which they had all been brought up, of rowing triumphs of a hundred years before. As one guest so eloquently put it: ‘It was a lovely event, quintessentially English, celebrating amateur sport of the highest level in a flower-show tent on an exquisite village green; even the English weather genteelly timed its appearance to cause minimum inconvenience.’ A 1913 model Vauxhall graced the scene and a Tiger Moth biplane, flown by George Woods, great grandson of Stanley Garton, made a flypast.

It was an unlikely occasion, born from an idea, and brought to a conclusion on Sunday when scattered families reunited with each other and became part of the wider family of the Leander eight of 1912. 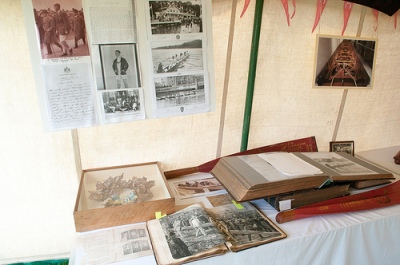 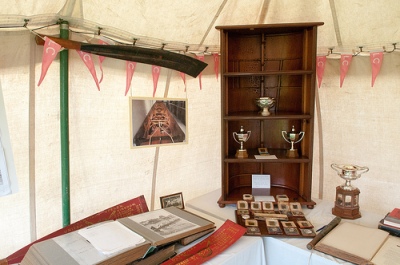 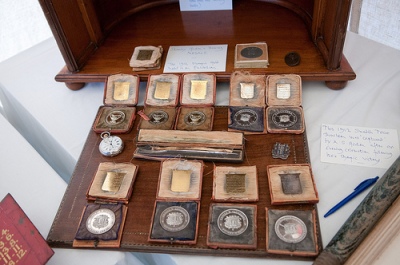 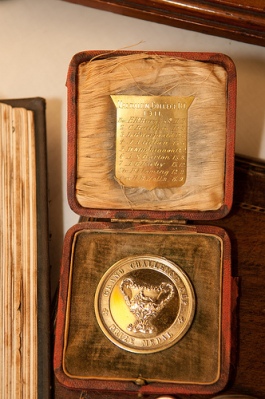 1911 Grand Challenge Cup won at Henley Royal Regatta by Magdalen College, to which most of the oarsmen in the Leander eight belonged. 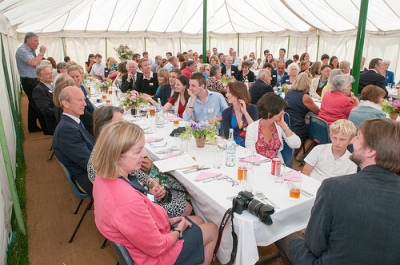 Young and old, gathered inside the tent to listen to the Leander oarsmen’s children, grandchildren and great grandchildren speaking about the 1912 Olympic Champions.

One hundred twenty-four descendants of the Leander eight and their coach, ‘Tarka’ Gold, happily gathered outside the tent for a group photo.