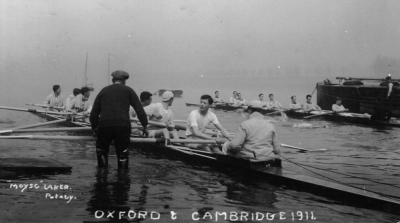 Here continues Stephen Cooper’s article from yesterday about Eric Fairbairn. The article is an abridged extract from Cooper’s book The Final Whistle: The Great War in Fifteen Players, which will be published in September 2012. 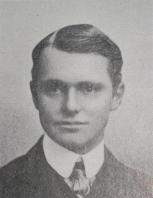 The following year, 1909, Eric captained the College Boat Club, but missed a second Blue when he fell ill a week before the Boat Race. Jesus entered the Grand at Henley, but lost the final to those pesky ‘Men of Ghent’. They would have to wait a while for the rematch, but in May 1911 set out on what coxswain Conrad Skinner called the ‘Belgian Expedition’. Later to be the Reverend Skinner, he had no hesitation in likening Jesus to Biblical underdogs in his expeditionary account:

‘The enterprise of taking a crew drawn from a single college to race the Belgians on their own waters was greeted for the most part with the scorn ridicule and cynical indifference which David evoked in his hardy challenge to Goliath of Gath.’

But this crew was not lacking in experience or motivation. It boasted six of the crew beaten in the 1909 Grand Challenge by the Belgians. Coaches were Uncle Steve and Stanley Bruce, who would later become Prime Minister of Australia. Thanks to Mr Bruce they ‘came to the post in the pink of physical fitness… able to turn out 43, 45 and even 47 strokes a minute without the least discomfort’. To their astonished pleasure, they were hailed as superstars:

‘The race became the primary topic in press and popular conversation. English ideals of sport were paramount and my cutting book is an almost unbelievable revelation of Belgian devotion to English sport and representative sportsmen.’

Over 100,000 spectators lined the canal at Terdonck on 25 May to see Jesus win ‘amid an uproar that was little short of deafening’. The acclaim continued off the water. A march composed in their honour was played at the gala dinner; ten thousand people waited four hours outside the banquet hall to catch a glimpse of the Jesus crew; a set of race postcards sold 170,000 copies in one week. Skinner later admitted: ‘No crew was ever feted as we were and many of us took shame at the poverty of England’s welcome to Belgian crews at Henley in past times. Never will any member of the crew forget the amazing generosity of the Gantois, in fact of the Belgians as a nation’.

Jesus College did not forget. Moved by the fate of tiny Belgium as Germany overran it in the first weeks of August 1914, the College started a Belgian relief fund in gratitude for the hospitality they had received at Ghent and raised £800 (or £60,000 today). Eric Fairbairn joined up immediately the recruitment offices opened after August Bank Holiday: his Belgian rivals were now allies in need. He was commissioned into the 10th Durham Light Infantry (DLI). 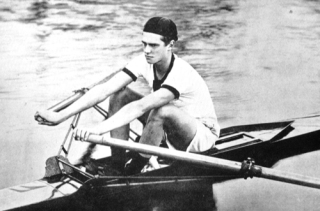 In all, 150 College members, including fifty from the Boat Club, were to give their lives in the War. The members of the ‘Belgian Expedition’ were hardest hit. Like Eric, they rushed to volunteer for the defence of their gracious hosts, outraged by reports of German atrocities. Hugh Willoughby Shields, who won the Lowe Double Sculls with Eric in 1910, was the first to die in October 1914, tending a wounded guardsman at Ypres; Lt Henry Goldsmith of the Devonshires was killed at Ploegsteert in May 1915; Thomas Crowe, died at Gallipoli in June; and Gerald Hudson was killed in January 1916. All four men vanished without trace; their names are to be found on memorials to those with no known grave.

Eric Fairbairn stood once again on Belgian soil on 12 June in trenches west of Wijtschate. He was a few miles from Ypres, and fifty from Ghent where the reception had been so tumultuous on that far-off day. On the night of 17 June Eric moved into the frontline: there was no attack over the top, just the sapping attrition of nightly shelling and mortar fire, and the ritual ‘stand-to’ at dusk and dawn. The War Diary for 20 June records: ‘All companies returned from trenches early this morning… D. Coy reports 2/Lt Fairburn [sic] dangerously wounded’. Like so many of the New Army’s inexperienced junior officers, Eric’s war did not last long: he was fatally wounded in his first week at the front.

Two silk handkerchiefs are the only personal effects returned to his mother. In February 1919, she also received his ‘Death Penny’ bronze plaque, to place alongside his Olympic silver medal. On the outer edge of the 12 cm disk are the words, ‘He died for freedom and honour’.

One Ghent winner who survived, Conrad Skinner, remembering his friends from that glorious day of innocent sporting battle in 1911, wrote: ‘it is a melancholy coincidence that the whole stern four of the Jesus crew, and also Shields, lost their lives in the Great War. Yet there is a feeling of just pride that this should occur in aiding Belgium in her gallant defence.’