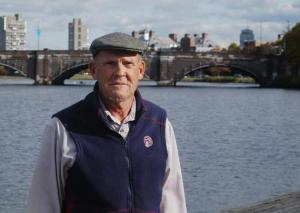 Given in recognition to a member of the U.S. rowing community, who has accomplished extraordinary feats in rowing, the Medal is the highest honor USRowing can bestow. Parker, 75, will be honored at the inaugural Golden Oars Awards Dinner on Wednesday, 30 November, at the New York Athletic Club in New York City.

“It is appropriate to recognize the achievements of Coach Harry Parker with the USRowing Medal of Honor at our first-ever Golden Oars Awards event,” said USRowing Chief Executive Officer Glenn Merry. “He is iconic in the sport of rowing and stands amongst the top coaches in the world. The U.S. Team benefited greatly through his coaching at several Olympic Games and many of our finest rowers developed during their time at Harvard. I suspect many rowers and coaches share my admiration for Coach Parker. It is with great enthusiasm that we celebrate his contributions to the sport and his life as an oarsman.”

“I recognize it’s a distinct honor and I appreciate it,” said Parker. “Honors are not my thing; my thing is coaching. That’s what I get a real sense of satisfaction from.”

Now in his 50th season as the Thomas Bolles Head Coach of Men’s Crew at Harvard, Parker is considered one of the most accomplished rowing coaches in the history of the sport. After being promoted from interim head coach to head coach in 1963 following Harvard’s victory over Yale University in the Harvard-Yale Race, Parker’s crews have achieved unprecedented success. His crews’ achievements include 21 undefeated seasons; 27 EARC Sprints titles; 21 junior varsity sprints titles; eight official and eight unofficial national championships, three IRA championships since 2003 and a 42-7 record over Yale in the Harvard-Yale Race.

Under Parker, Harvard crews have competed internationally at the 1968 Olympics and the 1967 World Rowing Championships. He was named the men’s Olympic coach for 1972, where he led the U.S. eight to a silver medal in Munich, Germany. He also served as coach of the first U.S. women’s crew to compete in the World Championships, winning a medal in 1975. Parker later coached the U.S. women’s eight to a bronze medal at the 1976 Olympic Games in Montreal.

Parker attended the University of Pennsylvania, where he majored in English and learned to row. Following college, Parker began sculling competitively, and won the men’s single sculls at the 1959 Pan American Games. That same year, Parker finished second at the Henley Royal Regatta to six-time champion Stuart MacKenzie. In 1960, he represented the United States in the event in the Olympic Games in Rome, where he finished fifth.