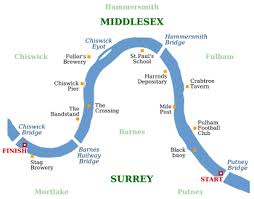 Tim sent an e-mail with a press release about an interesting talk by rowing historian Chris Dodd, who is giving a talk about The Boat Race on 17 March, at 7:30 p.m. The talk is organized by Chiswick Pier Trust. The press release reads:

Oxford have been racing Cambridge on the four-and-a-quarter-mile tidal ‘S’ bend from Putney to Mortlake since 1845. In the twenty-first century the spot where the Boat Race has been won or lost has shifted upstream from Hammersmith Bridge to Chiswick Reach, as in the 2010 race where Cambridge broke Oxford’s lead at Chiswick Steps.

Christopher Dodd, the Boat Race historian, recounts the thrills and spills of the Blues locked in perpetual conflict on the Tideway, the oarsmen who have been at the cutting edge of amateur rowing and amateur sport in Britain since the first race in 1829.