Berry And The ‘Demon’ 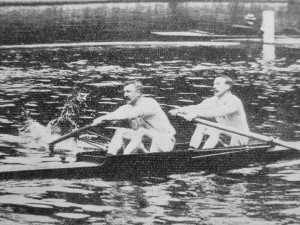 Now, I have said it before and I will say it again: Tim Koch of Auriol Kensington RC in London is a man you can trust. In an e-mail from yesterday Tim writes about my entry about Julius ‘Berry’ Beresford, “With reference to your recent item on Jack Beresford Senior (‘Berry’), do you know the ‘Demon of the River’ photograph? The attached copy is from a 1950 edition of Rowing magazine and shows the spray forming what seems to be a little devil attacking his boat.” No, although I have seen this photograph earlier, I have to confess I have never heard about the ‘Demon’ – great photo!

Tim continues in his e-mail, “We have a fine picture of Jack Senior at Auriol Kensington. He wanted to make Kensington a rival to Thames and London but the club was not as ambitious and so he went to Putney to become what Geoffrey Page called the best Captain Thames ever had. Page should know, his father, Freddie, signed him up as a cadet member of Thames RC at the age of six weeks. He would later write the book Hear the Boat Sing: A History of Thames Rowing Club and Tideway Rowing (1991). Good title!” I was a little slower than Geoffrey’s father, I signed up my daughter Ingrid as a member of my Swedish rowing club, Malmö Roddklubb, when she turned 1 year.
Tim finish up his nice e-mail with a very promising note: “My Henley Stewards’ Enclosure badge arrived in the post today – a sign that summer is on its way.” Now, there’s a summer sign! Thank you, Tim!