Go Fishing, Or The Eight That Forgot No. 3

After some serious rowing stuff as the lives of F.S. Kelly and Samuel F. Gordon, it could be nice with some ‘light’ material. I have chosen a funny post card from the mid-1910s. Unfortunately, I cannot read the name of the caricaturist. 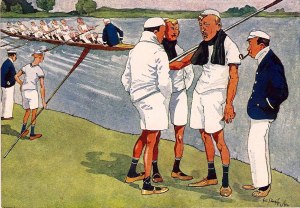 While the men on the right seem to be deeply engaged in a momentous discussion of the secrets of rowing, the eight on the left has left in a hurry, forgetting No. 3 on the shore. The heavy coxswain, who probably is the coach of the crew, is making certain that his boat is rowing in the correct way – the English Orthodox Style.

A jocular rhymester gave his view of the English Orthodox Style in some verses in the Cambridge student magazine The Granta in 1927:

Beware the Orthodox, my son,
The slides that check, the arms that snatch;
Beware the drop-in blade, and shun
The Bourneish shoulder-catch.

The ‘Bourneish’ is referring to Dr. Gilbert C. Bourne, an ex-Eton wet-bob who had rowed in two winning boats for Oxford in the Boat Race in 1882 and 1883. His son, Robert C. Bourne, stroked four winning Oxford eights against Cambridge in 1909, 1910, 1911, and 1912 (with his father as the coach). Dr. Bourne was a strong believer in the English Orthodox Style, which is clearly shown in his book A Text-Book of Oarsmanship with an Essay on Muscular Action in Rowing, which was published in 1925. In his book, Bourne trashes the Jesus College coach Steve Fairbairn from Australia, who had other ideas on how to row.

The post card is sent on what seems to be 26 November 1917 with a half-penny stamp to a Mr. D. Masefield, who lives, or at least is staying at, Wyndham Hotel on Old Street in Cardiff. It reads: ‘Thought this card rather fine. Would be pleased to see you on Friday, and maybe we could go fishing for a change. Your friend Ernest’

Is Ernest an old oarsman who is tired of pulling a competitive oar and instead would like to go fishing with his fellow ‘oar’, Mr. D. Masefield? We will never know…