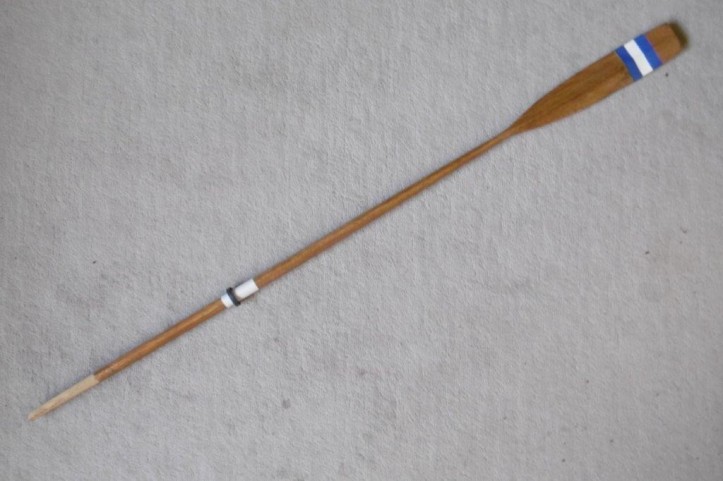 Maybe this could start a competition to find the smallest oar? The one in the above image would certainly not win, but at least it comes with a little story.

About 15 years ago, I saw several of these oars on a shelf in the office of Frankfurter Ruder Gesellschaft Germania. I asked Tilly, the club secretary, about them. She told me that a longtime member had given them to the club years ago, and that someone had neatly used blue and white tape to give them the club’s colors.

‘Could I have one?’ I asked. Tilly suggested I pay for it. She was satisfied with my offer so I got one. Tilly is now 95 years old but still comes around. She rowed herself and for many years she trained beginners, and trained them very well, as I know from rowing with a couple of her pupils.

A few years later, after training, I was talking with some older ladies, widows of members, who did gymnastics once a week at the club. One of them explained that her husband had bought the little oars in Asia. She said he had bought a hundred of them. When I had seen them, there weren’t enough to make the crew of a successful maiden eight happy. 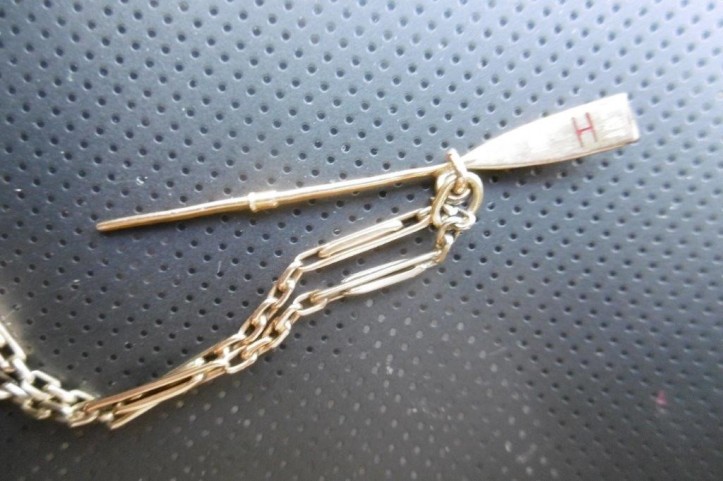 While the wooden oar is 28 inches long, too long to be a sweet little one, the one in the above image is only 2 1/16 inches long (5.2mm) and of 10K gold, very sweet and now 59 years old. If the others in the crew didn’t know what to do with them, like giving them as a charm bracelet to a girlfriend, I did, because it was just the thing for the chain of my pocket watch.

Harvard University use to award them to their crews. Was the university still doing that? Back then, the other major varsity teams also got appropriate charms. A few days ago, I asked a fellow at the varsity club and learned that rowing is now the only sport that still awards charms. But the little oars are pins and not of gold. Watch chains and charm bracelets are out of style – but not serious girlfriends, I hope. The oar pins are only given to seniors, since some had gotten one for each year on the crew. They are now presented at a reception on the Friday before the Head of the Charles Regatta.

Now who has a smaller, sweet little oar?