In these times when Rowing is cancelled all over, HTBS starts what we would like to call “The Dry Season Bottom-of-the-Barrel Series”. Rowing historian Tom Weil is the first one out.

The search for rowing history often unearths nuggets embedded in a larger matrix; a rowing article or picture in a magazine full of other material would be an example. The seller is selling the complete issue, so when you purchase it, you get what comes with it. And since part of the fascination (and, indeed, the discipline) of historical research is having some understanding of the context which embraces the specific subject matter, it can be informing to look through the entire issue. And it is often also entertaining. HTBS has a distinguished history of occasionally publishing pieces which bear a bare connection to rowing. This piece has a legitimate connection, but quickly veers from that into the unrelated.

The June 1, 1878 issue of Harper’s Weekly offers, on page 428, a wood engraving titled “The Columbia College Regatta – The Henley Four – Drawn by W.P. Snyder”, with descriptive text on page 430. Here is the image. The rowing that is pictured and described in that issue is why I bought the magazine.

But rowing is not what the editors had principally in mind when that edition hit the press. The cover image is a dramatic illustration of a state of mind that captivated much of the Western world at that time, and still reverberates among some of the troglodytes in our society today. Titled “The ‘Internationalists’ Are to Make the World All One Millennium – (Chaos)” and sketched in the style of the apocalyptic Biblical illustrator John Martin, a map of the globe is superimposed on a gaping skull encased in conceptualized sturm und drang. 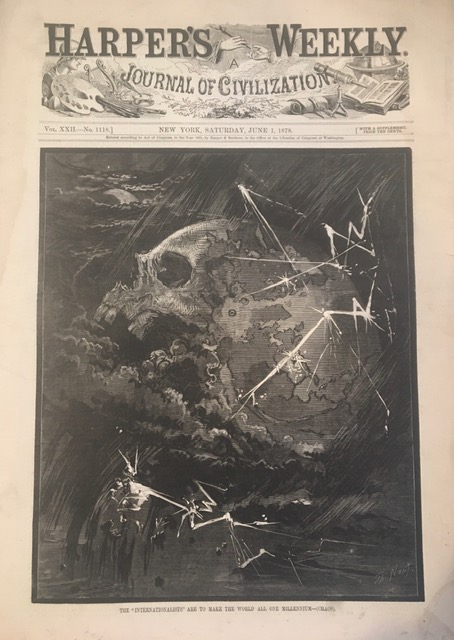 The same issue that reported the “Great Paris Exhibition” of that year (featuring displays by an array of nations) and highlighted the deployment of Sepoys and Gurkhas to Europe, railed against the threat of international cooperation. In the 140 years since then, the world has seen, and largely celebrated, the foundation of institutions such as FISA in 1892, the League of Nations in 1920, the United Nations, the World Bank, the International Monetary Fund and the International Court of Justice in 1945, the World Health Organization in 1948, and the European Union in 1993. Yet, even today, the specter of “internationalism” still haunts certain psyches. Plus ca change …

But, as to enjoying the unexpected dividends of the search for rowing history, that well-executed cover image is more compellingly interesting than the relatively pedestrian rowing engraving that provided the reason to purchase the magazine to begin with. So the searches continue …

*Lagniappe (noun North American) – something given as a bonus or extra gift.