Play Up, Play Up & Play THE Game 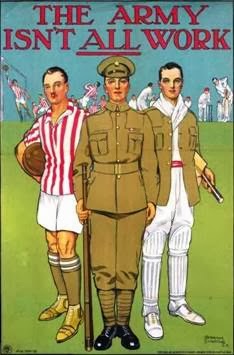 At the outbreak of the First World War in 1914, the British Army had approximately 710,000 men at its disposal. The years 1914 and 1915 were known as the years of the Volunteer Army, but in January 1916 conscription was introduced for single men aged 18-41. Recruitment posters played an important part both before and after its introduction.

Lord Kitchener (Secretary of State for War) believing that overwhelming manpower was the key to winning the War, set about looking for ways to encourage men of all classes to join up. General Sir Henry Rawlinson suggested that men would be more inclined to enlist in the Army if they knew that they were going to serve alongside their friends and work colleagues. He appealed to London stockbrokers to raise a battalion of men from workers in the City of London and by the end of August 1914, 1,600 men had enlisted in the 10th (Service) Bn. Royal Fusiliers, the first ‘Pals Battalion’ and the so-called ‘Stockbrokers’ Battalion’. 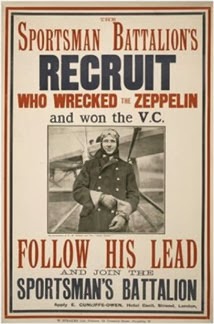 The 1st Sportsmen’s Battalion – The 23rd (Service) Battalion, Royal Fusiliers was formed in September 1914 and was made up of men who had made their name in sports such as cricket, boxing and football. This battalion proved so popular that a 2nd Sportsmen’s Battalion – The 24th (Service) Battalion, Royal Fusiliers followed in November 1914. The recruitment poster (above) does not play (pun intended) on the sporting prowess of potential recruits. Perhaps this is why the BBC in the first episode of Britain’s Great War called War Comes to Britain used an Australian Imperial Force (AIF) recruitment poster when discussing the Pals Battalions (28:00-29:30).

In Australia, the outbreak of the War was greeted with enthusiasm. Even before Britain declared war on Germany on 4 August 1914, it had pledged its support alongside other states of the British Empire and almost immediately began preparations to send forces overseas to participate in the conflict. Like Britain, as the war went on, casualty rates increased and the number of volunteers declined but unlike in Britain, the issue of conscription was put to a public vote, firstly in October 1916 and again in December 1917. On both occasions the country voted ‘No’ to conscription. 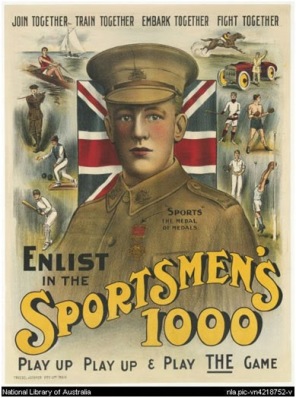 In 1916 the AIF launched a poster campaign aimed at recruiting a battalion of sportsmen into the defence forces to be known as The Sportsmen’s 1000. The artwork featured a portrait of Lieutenant Albert Jacka with images on each side of the portrait of cricketers, men playing bowls, golf and tennis; sculling and yachting, horse and car racing, hockey, boxing and Australian rules football. Jacka was the first Australian to receive the Victoria Cross during the First World War for his bravery at Gallipoli. The VC appears on his chest with the words: “Sports” The medal of medals.

It was said that one of the reasons Jacka was such a good soldier, and had such a fighting attitude, was that he had been a boxer before the war. The campaign to enlist sportsmen was fuelled by a strong belief that by playing sport, young men developed specific skills and qualities that could be used on the battlefield.

Albert Jacka’s military career was one of outstanding bravery. He enlisted in September 1914 in the AIF and landed in Gallipoli on 26 April 1915. For his action on 19 May 1915 he was awarded the Victoria Cross, the first for the AIF in the First World War, instantly becoming a national hero. He quickly rose through the ranks and on 29 April 1916 was commissioned second lieutenant. He received a Military Cross for action at Pozieres in August 1916 and a bar for action at Bullencourt in April 1917. He received his commission as captain on 15 March 1917. Wounded twice and then gassed in May 1918, he saw no more action. He returned to Melbourne to a hero’s welcome in 1919. He was demobilised in 1920 and died at the age of 39 on 17 January 1932. At his funeral, Jacka was described as ‘Australia’s greatest front-line soldier’.

You can see why he won his VC in this short video: 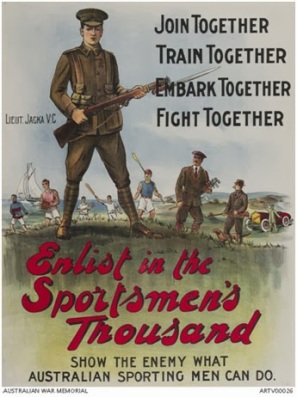 This poster, published by the State Parliamentary Recruiting Committee, depicts Lieut. Jacka VC, as a role model for a huge campaign to enlist more sportsmen into the Australian Imperial Force in 1917. It features two common recruiting devices used in Australia, a well-known local soldier and a target number of men required for a specially named group. In the centre is an oarsman, carrying his oar like of a pikeman of old, surrounded by other sportsmen as they are summoned by Jacka to ‘Enlist in the Sportsmen’s Thousand’ and ‘Show the enemy what Australian sporting men can do’. It is interesting to see that the word ‘thousand’ has replaced the number ‘1000’ from the earlier poster.

In another AIF enlistment poster (below), probably from 1917, the number ‘1000’ is back on the poster; in the upper right hand corner are attributes of sportsmen, among them also an oar. 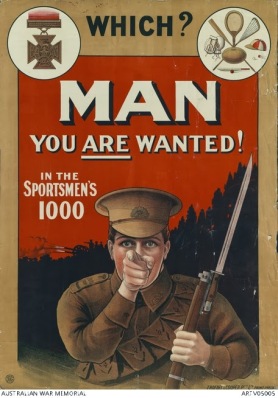 It may be stretching poetic licence to suggest that the following poem by Australian C. J. Dennis is using the word ‘rowing’ as we on HTBS are wont to do, but it sums up the spirit that the recruitment posters tried to convey. 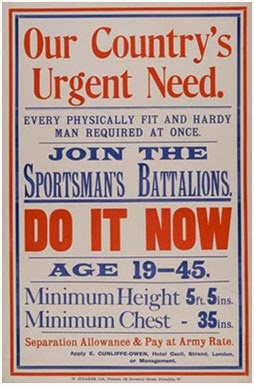 Back in Blighty, the Sportsmen’s Battalions continued to advertise for recruits but their enlistment posters continued to be dull and uninspiring.

This could not be said about the battalions formed primarily with the aim of recruiting professional footballers in both Scotland and England. In Scotland in November 1914, the full football team from Heart of Midlothian, players from Hibernian, Raith Rovers and Dunfermline, together with golfers, rugby players and their fans joined what became known as MacRae’s Battalion, officially the 16th Royal Scots. They were also known as ‘The Sporting Battalion’. 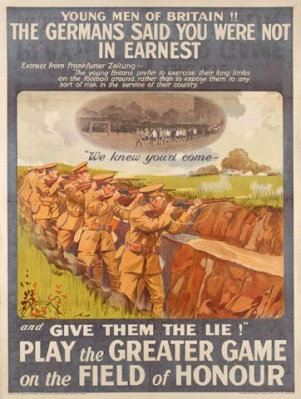 1914 Scottish recruitment poster aimed at footballers and other sportsmen.

December 1914 saw the formation of The Football Battalion (The 17th Service Battalion, Middlesex Regiment). There is a fine example of their recruitment poster in a previous HTBS post called ‘Lions not Donkeys’. Players from Clapton Orient (now Leyton Orient) were the first English Football League club to enlist together. Following the example of club captain, Fred Parker, around 40 players and staff volunteered and it soon went on to attract players from other clubs. 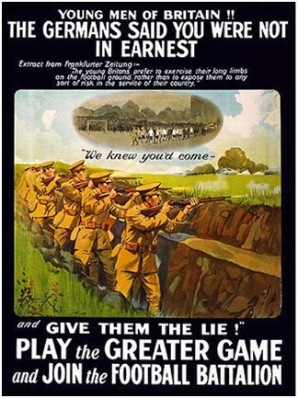 ‘This is not the time to play games’ was the theme of a speech by Lord Roberts seeking to persuade sportsmen to enlist. This poster depicts a Rugby Union player with a cheering crowd behind him, mirrored by a soldier holding a rifle instead of a rugby ball. 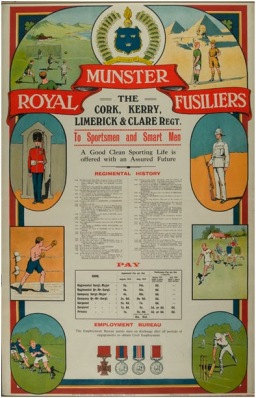 1919 ‘Sportsmen and Smart Men’ wanted for the RMF.

When the First World War finally ended in 1918, the world had changed forever. What hadn’t changed was the use of images of sportsmen to entice young men to ‘join up’. This is a nice example of a recruitment poster from 1919 for the Royal Munster Fusiliers, one of eight Irish infantry regiments in the British Army. It uses images of soccer and hockey, boxers and athletes, a tug-of-war team and a cricketer; hardly traditional Irish sports – there was no room for sports like hurling, Gaelic football or handball. The tag line A Good Clean Sporting Life is offered with an Assured Future was also to prove short-sighted as in 1922 five of the eight were disbanded on the establishment of the Irish Free State. It wasn’t only the world at large that was changing.