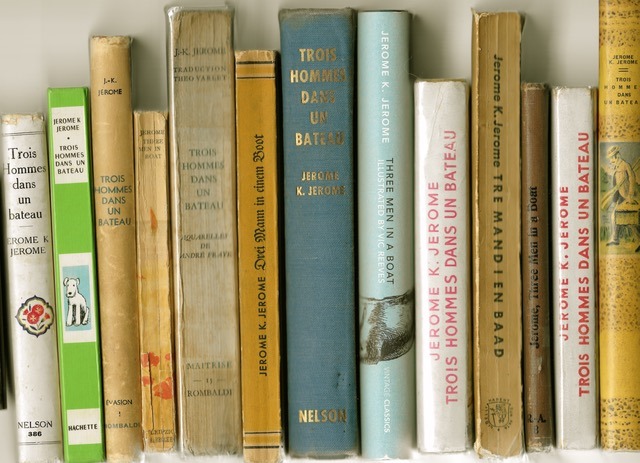 The success of Jerome K Jerome’s Three Men in a Boat brought an influx of tourists escaping the Big Smoke to the upper reaches of the Thames, accompanied by a boom in boatbuilding. Sculling a skiff or polling a punt was not all a mixed metaphor of plain sailing, however. There were hazards galore, as Harris and Co discovered, when mixing it with steam launches, fishermen, lock keepers or simply struggling with the hazards of camping afloat. Chris Dodd finds accident and argument within the pages.

There is a blatant bumptiousness about a steam launch that has a knack of rousing evil instincts, observes Jerome. ‘The expression on the face of the man who, with his hands in his pockets, stands by the stern, smoking a cigar, is sufficient to excuse a breach of the peace by itself; and the lordly whistle for you to get out of the way would, I am confident, ensure a verdict of “unjustifiable homicide” from any jury of river men.’

The book details how oar-powered vessels can frustrate the likes of steamers. Later, however, the three men accept the offer of a tow from one such, and rail at the antics of rowing boats that always get in the way.

There were hazards on the bank, too:

We had just commenced the third course—the bread and jam—when a gentleman in shirt-sleeves and a short pipe came along, and wanted to know if we knew that we were trespassing. We said we hadn’t given the matter sufficient consideration as yet to enable us to arrive at a definite conclusion on that point, but that, if he assured us on his word as a gentleman that we were trespassing, we would, without further hesitation, believe it.
― Jerome K Jerome, Three Men in a Boat

…to say nothing of hazards between ship and shore:

That is the only way to get a kettle to boil up the river. If it sees that you are waiting for it and are anxious, it will never even sing. You have to go away and begin your meal, as if you were not going to have any tea at all. You must not even look round at it. Then you will soon hear it sputtering away, mad to be made into tea.
― Jerome K Jerome, Three Men in a Boat

Not surprisingly, girls who go down to the river in boats set chauvinistic dilemmas for Jerome, George and Harris, if not for Montmorency:

It takes 3 girls to tow always; two to hold the rope, and the other one runs round and round, and giggles.
― Jerome K Jerome, Three Men in a Boat

To conclude, a little Danish:

Read Part 1 “Down to the river in skiffs” here.
Read Part 2 “A veritable can of pineapple” here.

Part 4 “Impressions of the Thames Valley” will be published tomorrow.