I, For One, Love Roman Numerals

Several reasons are given for the use of roman numerals in numbering the modern Olympics Games, including tradition, the fact that not everyone understood Arabic numerals or Greek numbers and my personal favourite – to add gravitas. But it is not the Olympic Games that are numbered sequentially. Rather, it is the period of four-years known as an ‘Olympiad’ of which the Games themselves are a celebration that are numbered. The first Olympiad of the modern era began on 1 January 1896 and lasted four years ending on 31 December 1899. We are approaching the end of the 30th Olympiad and on 1 January 2016, the 31st Olympiad will begin, and later that year the Rio Olympic Games will be held in celebration. A good explanation of the numbering system can be found on the Olympic-Legacy.Com website.

Surprisingly few of the official Olympic posters include roman numerals in their design but those that do are amongst the finest. The poster for the 1960 Games held in Rome, naturally makes full use of roman numerals – in the title ‘Jeux de la XVII Olympiade’ (Games of the 17th Olympiad), in the dates of the Games ‘25.VII – 11.IX’, and in the year ‘ROMA MCMLX’ (Rome 1960). Therefore, I will award it a gold medal.

The poster for the 1920 Games held in Antwerp, Belgium, is another of my favourites and well deserving of the silver medal.

On three occasions, the ‘Games of the Olympiad’ have been cancelled owing to war. The 1916 Games due to be held in Berlin were a victim to the Great War (later styled WW1) whilst the 1940 and 1944 Games were cancelled because of the replay.

The 1940 Games were originally awarded to Tokyo but the organisers were forced to forfeit them in July 1938 as Japan was involved in the Sino-Japanese War. Not surprisingly, Olympic posters for this Olympiad were printed, including a striking one using the roman numerals XII – bronze medal for sure.

The International Olympic Committee then awarded the Games to Helsinki, the city that had been the runner-up in the original bidding process but with the outbreak of World War II the Games were suspended indefinitely.

Whilst neither Tokyo nor Helsinki produced anything rowing related for the ‘1940 Games’, I have come across two pieces of ephemera linked to them. Sadly neither was eligible for the ‘Roman Numeral Poster Competition’.

The 1936 Olympic Games finished on 16 August and ten days later Punch published the above illustration by E. H. Shepard more famously known for his illustrations of anthropomorphic characters in The Wind in the Willows by Kenneth Grahame and Winnie-the-Pooh by A. A. Milne. A forlorn John Bull, surrounded by sporting equipment, decides to ‘go to sleep for another four years’ when Tokyo would host the 1940 Games. Keen eyed rowing types will spot a pair of sculls amongst the equipment – perhaps a hat-tip to Jack Beresford and Leslie ‘Dick’ Southwood, winners of the double-sculls in Berlin less than two weeks before the print appeared.

What John Bull was looking forward to – in rowing terms – should have taken place over four days beginning on 1 October 1940 on a new rowing course to be built at Todabashi, 12 kilometres north of Tokyo. Seven finals in the following order: coxed four, coxless pairs, single sculls, coxless fours, coxed pairs, double sculls and eights, at half-hour intervals, beginning at 2 p.m. were proposed by the Organising Committee for finals-day, Friday 4th. 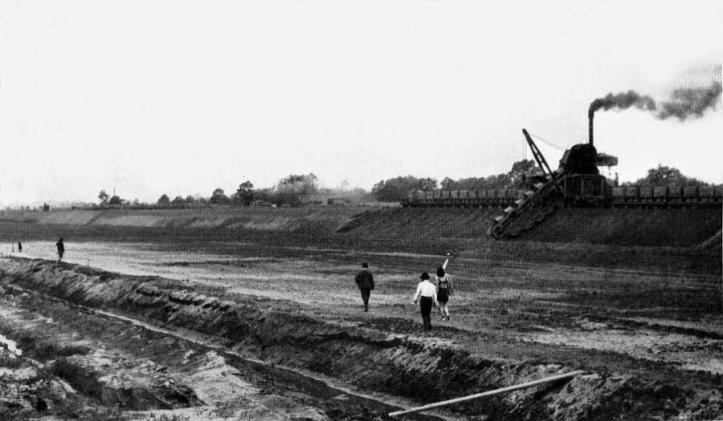 The Toda rowing course under construction.

The following is an extract from the Report of the Organizing Committee on its Work for the XIIth Olympic Games in Tokyo published in 1940.

When it was decided to hold the Tokyo Games, the Japan Amateur Rowing Association with the co-operation of the Ministry of the Interior of the Imperial Government and that of the people of Saitama Prefecture, started its plan to construct the Olympic rowing course at Todabashi, Saitama Prefecture. The ground-breaking ceremony was held on May 30, 1937. This course is located about 12 kilometres north of the centre of Tokyo.

It is about a 20 minute drive on the National Highway No. 9 (Nakasendo) from the centre of the metropolis. The entrance to the course will be located on the left hand side after passing the Toda bridge over the Arakawa river. Those who take the electric trains on the Tohoku (north eastern) Main Line, can reach the course by taking trains to either the Warabi or Kawaguchi station, then taking a bus for several minutes. The width of the course at the surface of the water will be 70 metres and the depth 3 metres, and the length 2,400 metres. An allowance of 100 metres at the start and the 300 metres at the finish will leave a straightway course of 2000 metres. Adjoining the residential district on the north bank, a bicycle road 5 metres wide and a motor car road 6 metres wide will be provided, separated by a belt of green lawn. These roads will lead throughout the distance of the 2000 metre course. On the south bank a grass lawn sloping at a 1.7 degree will be laid out, which may be utilized for general stands. Immediately after the ground breaking ceremony, the necessary surveying was accomplished by the labour services offered by the members of the Civil Engineering Department of the Tokyo Imperial University and the Construction Department of the Ministry of Railways. Thus, the actual excavation of the site was started in September, 1937, and at the time of the cancellation of the Olympic Games, the construction had been one-third completed. Although the Games have been cancelled, the work has been continued and, at the time of present writing, it has neared completion. This course is one of the outstanding features among the sports grounds in Japan.

After World War II, the venue was left in disrepair. When Tokyo was awarded the 1964 Olympics in 1958, the venue was expanded and reconstructed and hosted a successful Olympic Regatta, coverage of which you can find here. You can see what a wonderful facility the Toda rowing course is today in this short video.

A more striking rowing image from the lost Games of 1940 is the following Cinderella Stamp or Vignette issued by the Swiss Rowing Federation after the Games had been reallocated to Helsinki. I think it is a very beautiful image with lovely straight lines, a simple colour scheme and a classic pose suggesting teamwork on and off the water.

“For the Japanese, Indigo blue mirrors the color of the vast ocean surrounding the Japanese islands. The historical origin of this shade of blue can be traced to indigo dye. It was widely used in the past and is very common and popular in Japanese art and clothing today.” Inspector Insight.com.

Seventy-five years ago today, instead of the world watching the opening heats of the Olympic rowing regatta in Tokyo, Britain and in particular London, was in the middle of The Blitz. Three days earlier Germany, Italy and Japan signed the Tripartite Pact and rowing was the furthest thing on anyone’s mind. And today, as well as reflecting on what might have happened if the XII Olympiad had had its Games we can look forward to MMXX and the Games of the XXXII Olympiad when the rowing events will be held the Sea Forest International Regatta course in the heart of Tokyo. There had been some doubt as to whether the original venue proposed for the Olympic regatta would host the event after concerns over the full cost of building the new facility were expressed. You can read about those concerns here and the confirmation that they would indeed be held in Tokyo Bay here.