‘”A Yank at Cambridge” is superb’

As HTBS wrote yesterday, in June, HTBS editor Göran R Buckhorn published the book A YANK AT CAMBRIDGE – B.H. Howell: The Forgotten Champion about Benjamin Hunting Howell, an American who rowed and sculled in England in the late 1890s, first for Trinity Hall, Cambridge, and later for Thames RC.

In the spring of 2009, Hart Perry, then executive director of the National Rowing Foundation (NRF), showed me an old photo album that had just been donated to the organisation. The donor was Frederick Elliott, who had rowed for Hart at Kent School, Connecticut. Elliott had received the photo album from relatives of his step-grandmother, Juliette Katharine Howell Brandi. The album had once belonged to Brandi’s uncle, Benjamin Hunting Howell (1875-1953), of New York, who had studied at Trinity Hall, Cambridge University, England, between 1894 and 1898.

While studying at Trinity Hall, B.H. Howell began to row and he became a very successful oarsman, first at ‘the Hall’ and later for the Tideway club, Thames Rowing Club. The thirty-one black & white photographs in Howell’s album show him rowing and sculling at Henley Royal Regatta, in the Wingfield Sculls, the amateur championship of the Thames and Great Britain in the single sculls, and attending some social events in Cambridge.

Hart loved the images in the photo album and I, too, became thrilled about Howell’s accomplishments at the oars across the pond in the late 1890s. Of course, Hart realised my interest and soon I had promised him to do some research about Howell. What I then thought was going to be a 20-page ‘report’ on Howell and his rowing, became a 152-page book about the American oarsman, A YANK AT CAMBRIDGE – B.H. Howell: The Forgotten Champion, which was published in June.

Here are some quotes from rowing historians and others about A YANK AT CAMBRIDGE:

‘[…] when [Hart] Perry died in February of 2011, Buckhorn’s work was sidetracked by the loss. A year later, in memory of Perry, Buckhorn went to work in earnest and pieced together a biography of Howell’s rowing career. He turned the research and photo album into a 152-page book dedicated to Perry. “I wanted to keep my promise to Hart,” Buckhorn said.’
~ Ed Moran, USRowing’s website

‘Buckhorn’s A Yank at Cambridge was inspired by the late Hart Perry of the National Rowing Foundation (NRF) when it was given an album of Howell’s rowing photographs. Buckhorn tells the story of Howell’s episodic, plucky rowing life meticulously – a sporting life which ended with Howell’s return to the U.S. and his business of electronic components. It is copiously illustrated from the photo album and elsewhere, and resonates with both social realism of the 1890s and arguments exercising rowers and their blazerati.’
~ Chris Dodd, rowing historian, author of most recently Bonnie Brave Boat Rowers and Unto the Tideway Born

‘So bravo for bringing this story to light, and for telling the tale of an interesting gentleman, a fascinating time in history, and adding to the lure of the world of rowing.’
~ Julia Brandi, relative of Hunting Howell

‘It’s a fascinating book full of history.’
~ Clive Radley, author of The Radleys of the Lea

‘A Yank at Cambridge […] is superb. […] I expected to find only the story about B. H. Howell, however, I found the book full of other historical bits and facts: the early years of Cambridge and Oxford rowing, the establishment of the Henley Regatta with details of the American competitors and many images to round out the reader’s experience. I’m very impressed with the depth of [the] research.’
~ Bill Miller, rowing historian

‘A Yank at Cambridge reveals with spirit and humor the Brooklyn lad who triumphed among Britain’s finest oarsmen. With a graceful style and a stunning array of engaging pictures, Göran Buckhorn’s biography of Hunting Howell reveals a “forgotten champion” who earned rowing’s highest honors yet enjoyed little acclaim in his homeland. This book also reveals in telling detail the sports and social strata of Victorian England, which Howell conquered with equal gusto.’
~ William Lanouette, author and rowing historian 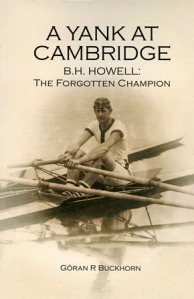 How to order your copy:

Great Britain
Richard Way Book Shop, Henley-on-Thames, (44-) -0- 1491 576663 (if you are calling from outside Great Britain please dial the number without the initial zero)

Online Amazon.com • Amazon.co.uk
(right now, without any interference from HTBS, the American Amazon is selling the book with a 15% discount)

Read an extract from the book here.