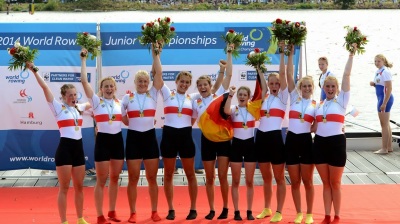 The home advantage paid off for Germany as they finished at the top of the medals table at the 2014 World Rowing Junior Championships in Hamburg, Germany.

The 13 finals raced on the fifth day of the regatta saw rowers face challenging rowing conditions which called for excellent technique. Germany was the only country to have boats in all 13 finals and they topped it off by winning the most medals including seven gold medals.

The golds for Germany came in the men’s and women’s eight, men’s and women’s single sculls, men’s four, men’s quadruple sculls and men’s double sculls. This gave the host nation a clean sweep in the blue riband boat classes. The women’s single saw Melanie Goeldner stay ahead of Camille Juillet of France and Marieke Keijser of the Netherlands to win the event. Tim Ole Naske won the men’s single sculls by a large margin with Daniel De Groot of Canada and South Africa’s Daniel Watkins taking silver and bronze respectively.

After missing the podium in 2013, the German women’s eight won this year over the 2013 Junior World Champions, Romania as well as the crew from Russia. Romania ended with bronze and Russia with silver. In the men’s eight Germany finished ahead of the Netherlands and Italy. The silver for the Netherlands was their first medal in this boat class and it represented one of two medals that the Dutch won at this regatta.

Romania finished second on the medals table with a count of two gold medals, two silvers and a bronze. The golds for Romania came in the women’s double sculls and the women’s pair. China also tallied up two gold medals. The Chinese brought a small team to the regatta, and found success in the women’s four and women’s quadruple sculls.

A number of these athletes will now move on to the Youth Olympic Games in Nanjing, China which begins on 17 August, 2014.

Next on the World Rowing calendar is the 2014 World Rowing Championships. These will be held in Amsterdam, the Netherlands, from 24 to 31 August.