The Clever Cox – A Memoir

HTBS has previously written about Stephen Hawking’s involvement with rowing while an undergraduate at University College, Oxford and its importance in his personal development before being diagnosed with a form of motor neuron disease. He has recently published his autobiography entitled, inevitably perhaps, My Brief History (Bantam Press, 2013). The publishers tell us:

For the first time, Stephen Hawking turns his gaze inward for a revealing look at his own life and intellectual evolution. My Brief History recounts Stephen Hawking’s improbable journey, from his post-war London boyhood to his years of international acclaim and celebrity. Illustrated with rarely seen photographs, this concise, witty and candid account introduces readers to the inquisitive schoolboy whose classmates nicknamed him ‘Einstein’; the jokester who once placed a bet with a colleague over the existence of a black hole; and the young husband and father striving to gain a foothold in the world of academia. 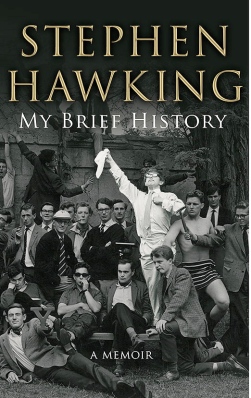 The book’s cover shows a splendid picture of the members of University College Boat Club doing the sort of things that students do when you point a camera at them. Hawking is shown at the centre of the action. His website has an extract from Chapter 3 of My Brief History entitled ‘Oxford’. It contains a short, self-deprecating account of his coxing career plus some wonderful high resolution photographs (click on the screen icon to enlarge). Page 32 has the famous picture of Hawking coxing ‘the rugby boat’ in his boater and blazer. The next page has a study entitled ‘the Boat Club at rest’ showing some serious looking young men in suits and ties on the college barge displaying a recently acquired trophy. However, it is the pictures on pages 34 and 35 taken in 1961 or 1962 entitled ‘the Boat Club at play’ that are the real joy. They show what in those more innocent times may have been called ‘gay young undergraduates’ striking various poses. Some hold that ‘the 60s’ began in 1963, ‘between the end of the Chatterley ban and the Beatles’ first LP’ and certainly most of the young oarsmen pictured look as though they could have come from the 1940s or 1950s – though there is some evidence of the influence of the ‘beat generation’ on one or two of them.

The University College Boat Club was founded in 1827 and its website has a very good history section compiled by the College Archivist, Dr Robin Darwall-Smith. It has some wonderful pictures (again click on the screen icon to enlarge) starting in with the Torpids First Eight of 1862. Despite the seemingly odd mixture of top hats, boaters and bowlers, there are none of the undergraduate affectations displayed by Hawking’s later group. The archive pictures conclude with ULBC’s most famous cox (though possibly least distinguished boat) ninety-nine years later. Time is, indeed, brief.