Day Three Of Henley 2013: Good Friday For Some, Black Friday For Drysdale

Eric Murray and Hamish Bond of Waiariki RC, New Zealand. I do not think I am being clever in predicting that they will win the Silver Goblets (Open M2-) for a third time. They have been undefeated since 2009 and they took six seconds off the world record at the London 2012 Games. Who could deny that they are amongst the greatest oarsmen of all time?

It is said that a picture paints a thousand words, if so here are 20,000 of them. After a very warm day and a very late night I am having trouble producing any text so I hope my photographs go some way to telling he story of Henley Friday 2013. On Saturday it is my custom to take a rest from going to The Royal so I can be fresh for the finals day on Sunday. If you cannot join me for the last day, remember that you can follow all the action on the excellent Regatta Radio. As well as full race commentary they have some wonderful live and pre-recorded interviews including one with the late Harry Parker made last year. Between 8 p.m. BST (3 p.m. EDT) and 10.30 a.m. BST (5.30 a.m. EDT) on Saturday night / Sunday morning they will be broadcasting highlights of semi-finals day. On Sunday, 7 July, there will be coverage of the prize giving and a roundup of HRR 2013 between 4 p.m. BST (11 a.m. EDT) and 5 p.m. BST (12 p.m. EDT).

The other way of keeping up with things is obviously through the HRR website which has news updates, results and the day’s timetable of racing. The online Daily Mail seems slightly obsessed with Henley at present with stories on Thursday and on Friday. It does not mention any rowing in its reports but it does have some jolly pictures. I suggest that you do not read the ridiculous text – but this is good advice for any Daily Mail article.

A panoramic view from the floating grandstand. The course does not really have a bend at the finish.

In the distance, Lucas and Langridge of London and Leander are leading Mackworth-Praed and Barton of Auriol Kensington and Exeter University in the Double Sculls Challenge Cup (Open M2x).

As the Progress Board shows, Spik of Klub Bled, Slovenia, leads Bahain of Aviron Toulousain, France, in the Diamonds (Open M1x). He won by 1 1/4 lengths.

Abingdon School going out to meet Eton in the Princess Elizabeth (Junior M8+). They won by 2 3/4 lengths. They are aiming to win the PE for a third year in succession and do seem to be in a different class to most of their opposition. 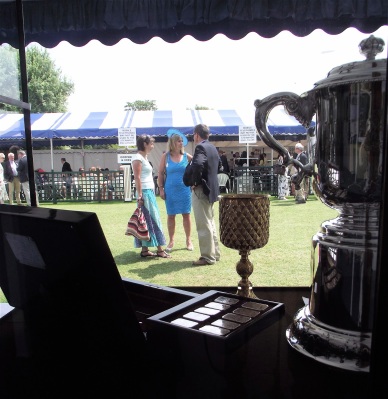 The trophies for the Diamonds and the Prince of Wales displayed in the prize tent frame some visitors to the Stewards’ Enclosure.

After a poor start, Britain’s Alan Campbell won his heat of the Diamonds (Open M1x) by 3 lengths over Bozhilov of Bulgaria. In the background, Mahé Drysdale crosses the course on his way to the start of his heat. Henley must be the only international regatta where the competitors have to share the water with a floating ice cream stand (top left). In addition there are Mississippi River Boats, jazz bands, Elvis impersonates, gondolas and flocks of geese to contend with. However, things are better than they were in 1914.

Mahé Drysdale – not all of his 17 stone or 108 kg is muscle at present. An out of training Drysdale (West End RC, New Zealand) lost to Aleksandar Aleksandrov (Kur Club, Azerbaijan) by 4 1/2 lengths.

In some Dutch Universities, the same boat club blazers are passed from one generation of rowers to the next. They are not repaired or cleaned and the only changes made by the temporary owner may be to embroider his name or that of a great win. These proud custodians of a fragrant tradition are from Nereus.

In the Ladies’ Challenge Plate (which is the Intermediate M8+ event and is not for ladies) Northeastern University A, USA, beat Galatasaray Spor Kulübü, Turkey, by 3/4 of a length. 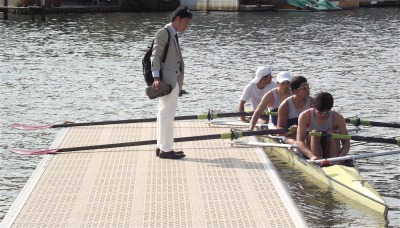 Mitsubishi BC, Japan, who were beaten by Elizabethan BC by 4 1/4 lengths in the Wyfolds (Club M4-). Japanese crews have slowly but surely improved over the last few years.

Poelchau Oberschule, Berlin, who lost to St Edward’s School in the Princess Elizabeth. 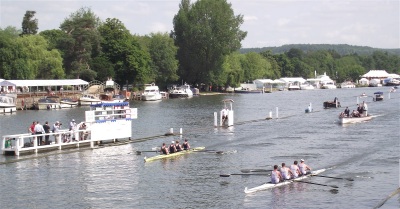 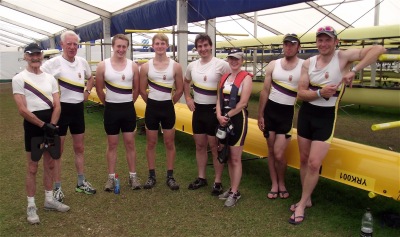 York City RC marked their 150th Anniversary by rowing over the course during the Friday Tea Interval. The crew was made up of two veterans, two juniors, three from the club’s 2007 Britannia winning crew and the club captain. The gentleman on the left is Dick Gradley, who is 81. He started rowing at he age of 65 and was captain of the British gymnastics team at the 1960 Rome Olympics. He still works as a fitness instructor. A picture of Dick in his younger days is here. Until I met Mr Gradley, I thought that Bond or Murray were the most remarkable athletes at the regatta.

In the Prince of Wales (Intermediate M4x) Arecroft RC and Cardiff University beat Tideway Scullers’ School and London RC by 2 1/4 lengths. An appeal against the result was not upheld.

Leander Club and Molesey BC rowing in the Ladies’ (Intermediate M8+). As the blades indicate, this is a four boat composite though only two club names are allowed in the crew title. They beat the Army RC by 4 1/4 lengths.

The atmosphere of elegance and sophistication in the area around the entrance to the Stewards’ Enclosure is regularly broken by the arrival of the truck that pumps out sewage from the septic tanks. My suggestion that this vehicle is disguised as a Pimm’s tanker has so far gone unheeded.

Leander Club and Oxford Brooks University (a.k.a. the GB Women’s Eight) who beat Newcastle University and ASR Nereus by 1 1/4 lengths in the Remenham (Open W8+). 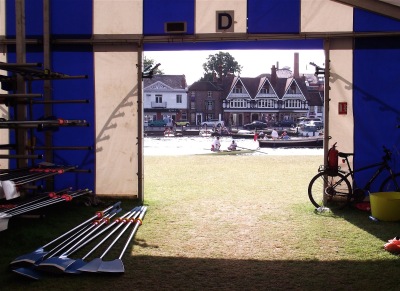 The end of a long, hot day. The view from one of the boat tent bays looking towards the former Little White Hart Hotel.