The view from Henley Bridge. The finish is in the background and the boat tent area is in the middle ground. The floating pile driver in the foreground will soon be removed.

As regular HTBS readers may remember, one of my annual rituals is to take part my club’s veterans’ (masters’) annual row from Hammersmith in West London to Henley-on-Thames in Oxfordshire.

Two eights take three days to cover the fifty-six miles, arriving on the Monday before the start of Henley Royal Regatta (which runs from Wednesday to Sunday). Staying overnight in Henley, one of my great pleasures is to wonder around the regatta site on the Tuesday, the day before the start of ‘The Royal’. Here you encounter few people beyond the rowers, coaches, officials and journalists and the atmosphere is one of excitement and expectation – mingled with a little fear. It is particularly delightful to see the awe of those making their first visit to the world’s most famous regatta. However much you may read about or see pictures of Henley, nothing prepares you for seeing the real life setting. The only downside to mixing with athletes at the peak of their training is that it reminds me (were any reminder needed) of how old and unfit I am. I then resolve to start training again…… tomorrow.

Here are some pictures of Henley’s final preparations:

In front of the floating grandstand – checking out the opposition. 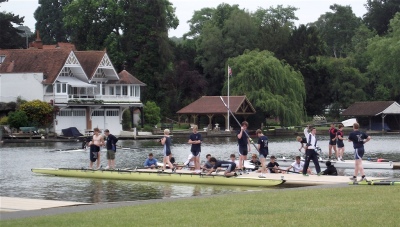 Trees in the Stewards’ Enclosure are forbidden to drop leaves during the Regatta.

Twenty-four hours later this mode of dress would not be acceptable in the Stewards’ Enclosure.

Inside one of the boat tents. 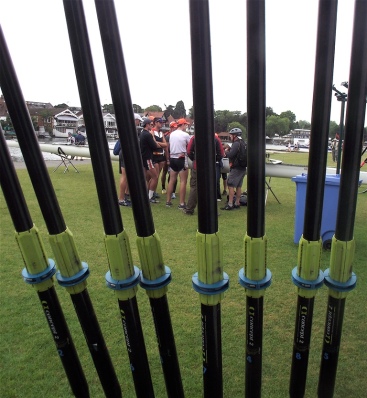 A team talk from the coach.

The view from the bow.

Thoughts from the skiff – ‘Are they as good as we were….’.