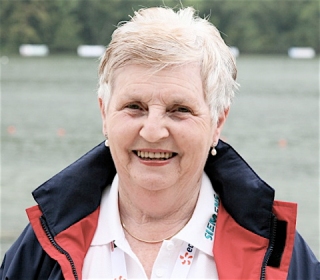 On 14 June Buckingham Palace published the Queen’s Birthday Honours List for 2013. These awards ‘recognise the achievements and service of extraordinary people across the United Kingdom’ www.gov.uk/honours/overview and rowing received on of the highest honours. The title of ‘Dame Commander of the Most Excellent Order of the British Empire’ (DBE) was given to ‘Mrs. Diana Margaret Ellis CBE, Executive Chair, British Rowing, for services to rowing’. In more informal terms, Di Ellis has become a Dame, the female equivalent of becoming a Knight and having the title ‘Sir’. She thus joins the exclusive club that consists of Sir Harcourt Gilbey Gold (‘Tarka’), Sir Steve Redgrave, Sir Matthew Pinsent and Sir David Tanner. On Twitter, Sir Matthew @matthewcpinsent wrote:

Great news that DI Ellis has become a Dame. One of rowing’s softly spoken heroes.

Dame Di ended her final term of office as Chairman and later Executive Chairman of British Rowing last February after fifty-two years in the sport which included time as an international rower, cox, umpire, official and always dedicated servant of rowing in the UK. There are very few complete lists of the posts that Di has held as she has worked so hard for so long. She became Chairman of the Amateur Rowing Association (now British Rowing) in 1989, and in 1997 she became the first woman to be elected a Steward of Henley Royal Regatta. Di has been Chairman of a large number of committees, including the British Rowing Championships and the ARA Women’s Commission and she has served on the organising bodies of seven world events (including the 2005 World Cup and the 2006 World Rowing Championships) and was part of the London 2012 bid team. She has been a representative to both the British Olympic Association and to FISA. 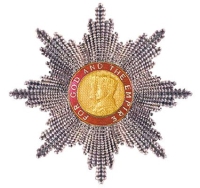 Other past honours that Di has received include a CBE in the 2004 Queen’s Birthday List (also ‘for services to rowing’), and in 2012 FISA awarded her the Distinguished Service to International Rowing Award. If you have the idea that she is ‘in retirement’, think again, Di is currently President of the Organising Committee for the 2013 World Cup. An interesting recent interview can be read here.

In Di’s time as head of the ARA / British Rowing she led the sport in Britain through a period of enormous and unprecedented change and growth, resulting in a level of international success undreamed of not many years ago. Rodgers and Hammerstein once observed that ‘There Is Nothing Like A Dame’. This may or may not be true but few would dispute that there are very few people like Dame Diana Margaret Ellis CBE. 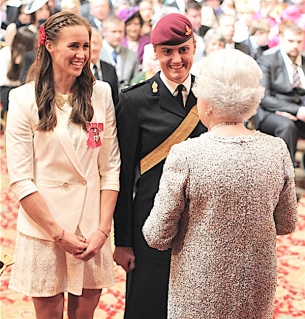 In an investiture held last April (and similar to the one Di will attend later this year) Helen Glover and Heather Stanning were made MBEs by the Queen following their winning the Women’s Coxless Pairs at the London Olympics. Stanning’s uniform is that of a Captain in the Royal Artillery and she is currently on active service in Afghanistan. The pair intend to defend their title in Rio in 2016. Photograph from Metro.

(Perhaps HTBS readers would allow me to include a non-rowing story about a famous Hollywood actress of British birth who was to be made a Dame by the Queen in a ceremony at Buckingham Palace. Her ‘people’ telephoned the Queen’s Private Secretary with two questions from the star. Could her security men check the Palace over first and would the Queen wait if she was late? Thankfully the answers were ‘no’ and ‘no’. The lesson here is, do not try and be more Royal than Royalty).