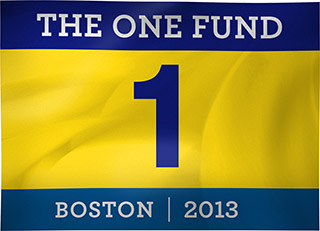 Regarding the tragedy in Boston on 15 April, CNN writes,

Massachusetts Governor Deval Patrick and Boston’s Mayor Tom Menino says the city has established ‘One Fund Boston’. “At times like this we are one state, one city and one people,” Governor Patrick said. Boston based insurance company John Hancock has already committed $1 million to the fund, which will raise money for families most affected by the bombings.