Yesterday, the final pre-Boat Race press conference was held at the ‘Media Centre’ (otherwise known as Thames Rowing Club), two days before the big event. These are inherently unsatisfactory occasions as the chosen representatives of the two boat clubs are very unlikely to say anything but that they are well prepared and confident. If they have any doubts, they are not going to share them with the wider world – though this would make for a much more interesting event. Even when were given the chance to ‘trash talk’ their opponents (like boxers at a weigh-in) they decline the opportunity (when Sean Bowden was asked what he thought of the fact that Oxford were the favourites, he replied in words to the effect that he did not gamble). Fortunately, the Umpires, Matthew Pinsent and Boris Rankov, were slightly more informative. 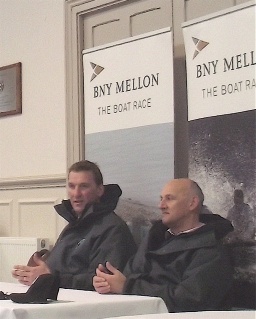 Matthew was asked if any changes had been made following last year’s incident when a protester swam into the path of the race causing it to be restarted after a long delay. He declined to talk about security but said that the Boat Race Umpires’ Panel had analysed the incident in great detail and decided that the existing rules were adequate and that the race will not be run differently. The only change would be that, if the race was obstructed for whatever reason, the procedure would be:

3) Once the obstruction was passed the race would be restarted as quickly as possible with both crews in the relative positions that they held when the race was halted (last year the crews were sent back to the point where the race had been stopped and had to wait a long time for the churned up water to subside). When the obstruction was passed it would no longer be the umpire’s concern and what the following flotilla did would depend on the prevailing circumstances.

Matthew stressed that none of this was a criticism of the 2012 Umpire, John Garrett, who had to deal with an unprecedented situation. He also understood that the general public wants excitement but that he, as the umpire, wants a clean race. The Boat Race is, Matthew continued, a most complicated and unpredictable event. The ‘acid test’ is for him to be able to get out at the finish and be ‘pretty much ignored’ so he can ‘slip off to the bar’. Boris Rankov added that ‘the umpires are the only people involved who cannot win’. Responding to an attempt to draw him on the subject of security, Matthew said that he would not like it if the public were denied access to the river. He held that among the joys of the event are the facts that it is free, that the riverbanks are packed and that the pubs are full.

I feel that this year the biggest defence against idiot swimmers may not be the fast boats of the Royal Marines stationed along the course, but will be the freezing temperatures. A bigger danger may be from debris swept into the river by recent high tides. Strangely, another problem may be an attack by angry otters.