The Draw for the 172nd Wingfield Sculls

The Wingfield Sculls is a single sculling race run over the Putney to Mortlake course on the Thames in London. It was first held in 1830 and the women’s race was added in 2007. At various times it has included the titles of ‘Championship of the Thames’ and the ‘British (or English) Amateur Sculling Championship’. 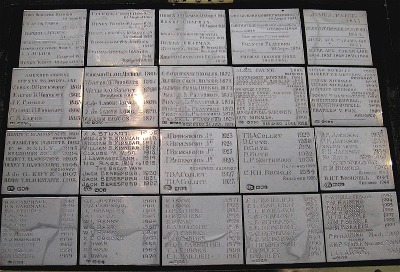 A press release from Wade Hall-Crags, the Honorary Secretary of the Wingfield Sculls states:

Thursday, 1st November will see two races of Internationals challenging for the title ‘Champion of the Thames’. This is the 172nd race for the pair of silver sculls presented by Henry C. Wingfield ‘to be held by the best’ as long as they agreed to race on his birthday, 10th August, ‘for ever’. The events are organised by a committee consisting of former winners (‘Champions’), who each meet each year to arrange the races and appoint an umpire from among their ranks.

The Women’s Race starts at 12:30 and will be between Imogen Walsh (London RC), Debbie Flood (Leander), Beth Rodford (Gloucester) and Jess Eddie (University of London). Debbie and Beth were in the Quad that came fifth in the Olympics and Jess was fifth in the Olympic Eight. Imogen will be the only new competitor in the race, she won Gold in the Lightweight Quad at the 2011 World Championships.

From the Wingfield Sculls archive. The record of the first eight races.

The Men’s Race starts at 1:30 and sees the exciting meeting of last year’s winner (and course record holder) and the current Olympic Gold and Bronze medalists. Put another way, it is the meeting of the 88th Champion, the 87th Champion and the 86th Champion. Lightweight Adam Freeman-Pask will be defending his title against Olympic sculls winner Mahe Drysdale and London third placed sculler, Alan Campbell. Mahe was Wingfields Champion in 2007 and 2008 and Alan won in 2006, 2009 and 2010. In Alan’s 2009 victory he beat his great rival, friend and clubmate, Mahe, the only time they have raced each other over the Putney to Mortlake course.

… Henry C. Wingfield… in 1830 presented a prize for a race ‘between gentlemen’ on condition that it was rowed at half flood from Westminster to Putney against all challengers annually on the 10th day of August. Like Thomas Doggett he blandly added the words ‘for ever’… The race is now rowed over a different course, and on any day which is decided upon by the committee, not even necessarily at half flood. But Mr. Wingfield achieved immortality in one respect. The race has gone on a great deal longer than he had any justifiable reason to expect.

The HTBS video of last year’s race is here.