HTBS’s Greg Denieffe went to the Olympic Rowing at Eton Dorney and could not find an official rowing programme. A kind lady with a rowing mad friend saved him. Here is Greg’s story:

1908, 1948 and 2012. The three years when the Olympics were held in London. Of course, the rowing was held outside the capital each time; Henley-on-Thames had the honour in 1908 and 1948, and Eton Dorney in 2012. Now imagine looking forward to the Games for seven years and imagine looking forward for seven years to be at the Olympic Regatta, and imagine getting tickets for the rowing in the lottery. Yes, I would go to the ball!

On Sunday 29 July, we joined the other thousands and thousands of people on the shuttle buses and on the long walk to the course. Once inside we passed the queues for the toilets, the water pumps, the food sellers and the souvenir stalls. We would buy our programme further up the course. There were lots of programme sellers and they were selling The London 2012 Olympic Games Official Programme for ten pounds and The Official Olympic Games Daily Programme for five pounds. All very nice, lovely glossy magazines with loads of articles about what were happening at all the Olympic venues; but I would like The Rowing Programme, please! “Sorry sir, but we don’t have a sport specific programme”. Don’t worry readers, I got over it, but it rankled, just a bit. You see, I’ve been to a few big rowing events and I’ve always had a programme, but not this time it seemed.

The 1908 regatta was held at Henley-on-Thames on July 28 and the three following days and they had a daily programme. That’s the way to do it.

The cover of the official 1908 rowing programme for Wednesday 29 July.

Even in 1948, at the so called Austerity Games there was a different colour programme for each of the four days of the regatta held on the 5, 6, 7 and 9 August. Did you notice the crowds in the BBC production of Bert and Dickie, all waving the correct programme on finals day?

The cover of the official 1948 rowing programme for Monday 9 August, finals day.

Alas, 2012 was different. No official rowing programme. There was one for sailing, and one for football and daily ones for the athletics. Now, I think a sport that produced two gold, two silver and two bronze medals for Great Britain in Beijing and promised to deliver more in London deserved, at least, a programme.

The following day we returned to Eton Dorney for a very short day’s racing. Like sheep, we found our place on the course as close to where we had been the previous day. Making ourselves as comfortable as we could, we waited for the first race and as soon as it finished, I noticed a young girl in front of me with what I thought was, you’ve guessed it, a programme! I politely enquired of the young girl’s mother as to where this seemingly magical document could be found. “Oh” she said, “a rowing mad friend made it for my daughter”. So that was that, I thought. Not so. Seeing the look of disappointment on my daughter’s face (and mine!), the kind lady produced a spare copy from her bag and handed it over. What luck?

The week before we set off to Eton Dorney, I bought I-SPY FLAGS to keep my six-year-old busy and it certainly did. With the flags of all the competing countries fluttering over the grandstand, she was busy spotting and ticking and for the medal ceremonies there were more flags and even people wandering around draped in flags. We even spotted the correct shaped flag of Switzerland! 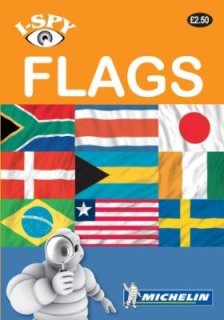 The Cover of the ‘Official’ I-SPY FLAGS.

This is what ispymichelin.com has to say about their little books:

‘Do you remember the popular Michelin I-Spy books? If you were a child in the 1950s and 60s the answer will probably be yes.The iconic book collection was back on the shelves for Christmas 2009 for the first time since 2002, encouraging children of all ages to get out and explore the world around them.

‘Created by Charles Warrell in 1948 the pocket-sized picture books were designed to develop children’s curiosity, powers of observation and sense of discovery. Each book was based on a specific theme I-Spy Cars, I-Spy in the Country, I-Spy on the Road, I-Spy Below your Feet and so on. Within the 40-page books were illustrations of things for children to spot which earned them a certain number of points.

‘During its heyday Michelin I-Spy had a cult following with more than 1.5million children becoming members of the I-Spy ‘tribe’, headed up by Big Chief I-Spy, Warrell himself. Once children had ‘spied’ all of the items in the book they sent it to Wigwam-by-the-Water (later Wigwam-by-the-Green) in London and completed books were rewarded with badges.’

What we now had in our (yes our) possession, was another ‘spotting’ book, The completely unofficial I-SPY book of Olympic Rowing 2012. A very well thought out 16-page booklet that the author should be very proud of. The ‘programme’ has a nice introduction, followed by details of all the Great Britain crews, including photographs. Next are seven pages of blade colours. Throw in a few specials like Jürgen Grobler and a rigger jigger and there were hours of fun to be had.  Of course there is a spotting box to tick and the I-SPY points for each ‘spot’. The last two pages are a race schedule and maps of the course. The only snag was how would I keep my six-year-old from filling in the boxes until I had a chance to copy it? Bribery of course! 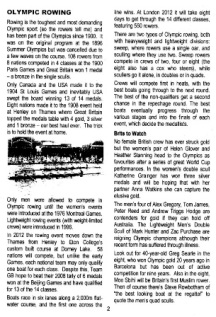 I hoped to meet the kind lady who gave it to us and find out who the compiler was, but although we returned for two more days of racing, we never saw her again. Here are a few pages for HTBS readers to enjoy.

It was great to be part of the Olympics and see some of the best rowers in the world at their peak.  Let’s hope someone down Rio way has the good sense to be reading HTBS and is in charge of the Olympic Rowing in 2016.