Tim Koch: The First Of The Henleys 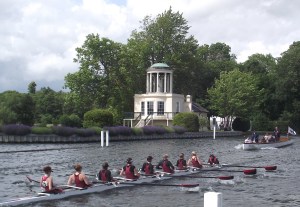 Henley has started. Not ‘The Royal’ but the 24th Henley Women’s Regatta which this year runs from Friday 17 to the Sunday 19 June. It will be followed by the original Henley (29 June – 3 July) and then the Henley Masters (8 – 9 July).

As I write on Saturday evening, I am damp and steaming as I have just returned from Henley on Thames having experienced a day of heavy showers. I am keen to get this posted before Göran (Mr HTBS) leaves for Sweden (and then onto England) so I am going to be very lazy and direct those who are interested to this press release stating that the 2011 Regatta ‘promises to be most hotly contested for years’ and this nice history of the event. Beyond that I will only offer some of my pictures showing the day.

The picture above gives evidence of the strong head winds suffered on Saturday as it shows a boat that attempted to cross in a gap between the booms but was blown onto one of the piles that secure the booms. 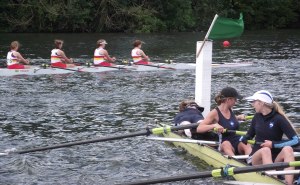 The picture just above shows the bow women lying on the canvas, holding the boat off the pile and out of the racing lane while a race went past. A safety boat pulled them free. I have every sympathy for the coxswains and steers in such conditions, especially on the Henley course, which is marked, not by forgiving buoys, but by unyielding lengths of timber. They are one of the more dubious things that make racing at Henley ‘special’.