Peter And His Magnum Opus 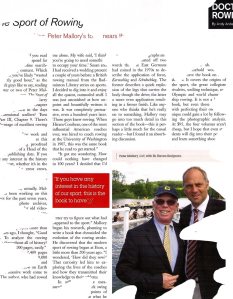 My fellow-director of the Friends of Rowing History, Peter Mallory, is getting good coverage in the current issue of Rowing News, Vol. 18, issue 5, July 2011. It is ‘Doctor Rowing’, Andy Anderson, who writes about Peter and his Magnum opus, The Sport of Rowing, which is to be published later this year. The collector’s edition (250 copies a $300 a pop) has already sold out, so everyone who is interested in this four-volume, 2,500-page book has to do with the ‘trade edition’ for measly $95. Large parts of Peter’s book have already been published on the web, but that doesn’t seem to stop rowers from pre-ordering the book. It is the River and Rowing Museum which is going to publish it. I have to say that I admire Peter, not only for doing research, writing, but also promoting the book. It is easy to blow out all your candles during the two first steps, and to keep at it, also during step three, can be hard. But Peter has done a tremendously good job getting the word out about his book, and that is paying off right now. Good luck, Peter, with the book!