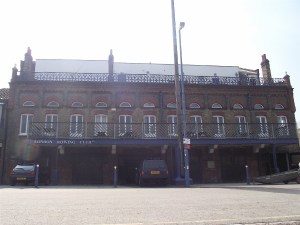 A final ‘selling point’ (were one needed) was that Putney was at one end of the ‘Championship Course’, a ‘fair’ stretch of a winding river to race on and which had been used for the Oxford – Cambridge Boat Race and professional sculling matches for many years. A map of 1871 is here. (‘Dung Wharf’ now houses luxury apartments and has had a name change).

‘[It] is of stock brick with tall chimneys and makes use of typically mid-Victorian (coloured) brickwork details to provide visual interest to the facade. The roofline has been altered to provide an additional storey and the original ornate balcony has been replaced with a much simpler structure, but overall the building is remarkably original and even retains its original iron balustrade on the roof.’

There are plans to replace the ‘simple’ modern balcony with a copy of the original ‘ornate’ one shown here and here (with Leander Club on the right). The ‘1900’ date given is incorrect, the picture was taken before the road of 1887 was put down.

In 1860, four years after London RC established themselves at Putney, they were joined by Leander Club, also escaping from the horrors of central London rowing. Initially operating out of a tent, in 1866 they built a more permanent structure to the right of LRC. The centre of its activities moved to Henley on Thames after they erected a boathouse there in 1897 but Leander retained a Putney base until 1961. Today, Kings College School BC and (I think) HSBC RC stand on the site.

Also in 1860, Thames RC was founded as the City of London Rowing Club. They were initially based in a room at the Red Lion Hotel, 2 Putney High Street and in, what was by then, Simmons Yard. By 1879 Thames had a new, purpose built boathouse. The PECA Report says this of it:

‘Apart from the now in filled, formerly open first floor balcony the building largely retains its original appearance. It is of two storeys with a high roof structure incorporating clerestory windows and is relatively simple in overall design. The balcony area projects over the solid brick structure of the ground floor and is supported on cast iron columns. For such a low-key structure to have survived to such an original extent is remarkable […] The building has recently had planning permission granted for works to the front facade (among other modifications); these will alter the appearance of the former balcony but the original structure will still be discernible.’

The third and final installment will continue tomorrow!