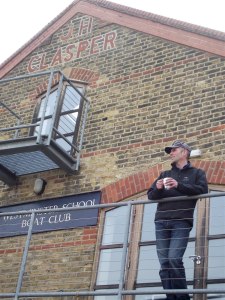 Vesta RC had been formed in 1871 and was initially based at the Feathers Boathouse on the River Wandle in south London. By 1875 it had moved to the Unity Boat House on the Putney Embankment (run by the famous rowing and boatbuilding Phelps family for many years). The Unity is now Ranelagh Sailing Club, situated between Westminster School BC and the building that Vesta erected as its boathouse in 1890 and which still serves it today. 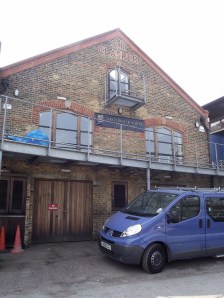 The only Victorian boathouse not yet mentioned that still stands on the Embankment started life slightly differently. What is now Westminster School Boat Club was erected by the boat builder, J.H. Clasper, I think in the 1880s. John Hawks Clasper (1835-1908) was the son of the famous and innovative Newcastle boat builder, oarsman and coach, Harry Clasper (1812-1870). John moved south in the late 1860s and by the 1870s was building boats in Wandsworth (just upriver from Putney) and in Oxford. Many of the boats used in the Oxford-Cambridge Boat Race in this period were made by him. The first reference that I have of him as ‘Clasper of Putney’ is 1882 when he ‘steered’ Payne in the Wingfield Sculls from a following boat. Between 1887 and 1897, ‘Clasper of Putney’ again built many of the craft used in the University Boat Race. The original building has been thoughtfully and ‘lightly’ adapted for modern use by WSBC and the name ‘JH Clasper’ is still nicely picked out in red brick on the gable end (see above and on top). 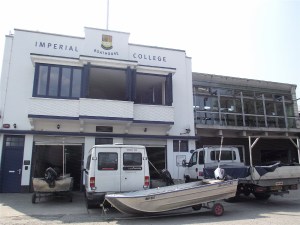 The next surviving boathouse at Putney dates from much later. It is the very pleasing building put up for Imperial College (London) BC in 1937. The PECA Report again:

‘Its sleek moderne lines make for an attractive contrast to the dominant Victoriana, varying the styles of the group of boathouses but keeping to their overall character. It is a highly individual and positive building, featuring a wave motif on the rendered panel beneath its cluster of Crittall windows. It is also one of the only quintessentially 1930s buildings in this part of Putney. A contemporary extension to the boat house […] was added in 1997.’

The modern extension is not unattractive and it allows the original and better part of the boathouse to dominate. Sadly, a small terrace of Victorian houses had to be demolished to make way for it.

The remaining architectural ‘style’ on the Embankment is, unfortunately, that of the post 1939-1945 War period. The PECA is generous:

‘[…] relatively recent additions reflect the architecture style of the 50s and 60s and should be regarded as positive in terms of their function and group value even though their overall design lacks the finesse of their neighbours.’

While accepting that a rowing club must be a functional place and not (in the words of the late Peter Coni) ‘a sporting slum’, I find it hard to be positive about the architecture of Kings College School (built for Barclays Bank RC), HSBC (since 1992 the name for the Midland Bank, the full name of the ‘Hong Kong and Shanghai Banking Corporation’ is never used) and Dulwich College (built for the NatWest Bank RC). The only building with some character in this group is that of Crabtree BC (built for Lensbury RC, a club for Shell Oil and British Petroleum employees). I find it difficult to date but its nice external spiral staircase suggests that it may be older than its three neighbours to the west.

The architecturally not so attractive Kings College Boathouse.

In its conclusions, the Putney Embankment Conservation Area Report says:

‘Many of the boathouses on the Embankment are fine or indeed excellent buildings, but it is their use that gives them their group character.’

That ‘use’ is rowing. Long may it continue!