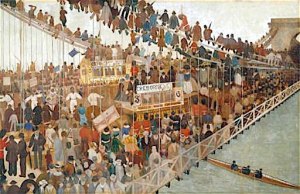 After finishing up selling beer at Auriol Kenisington RC’s bar during Boat Race Day, Tim Koch sent me an e-mail. He writes, “I cannot add much to what has been already said about the 2010 Oxford-Cambridge Boat Race. More often than not the event is just a procession, but this year it was an exciting spectacle. As the race was held over Easter the crowds on the towpath were fewer than usual but this resulted in most people getting a good view. For the first time in many years, people were allowed to stand on Hammersmith Bridge which was only closed to motor traffic. It reminded me of the famous Walter Greaves painting, Hammersmith Bridge On Boat Race Day (1862).” [Seen above] 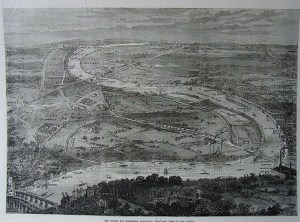 Tim continues, “The Boat Race always prompts me to revisit a favourite print from the Graphic magazine of April 1875. The ‘Champion Course’ (Putney to Mortlake or visa versa) is, naturally, little changed but the man made landmarks come and go. In 1875 the start had an aqueduct where Putney Road Bridge now is. Leander still had a Putney boathouse. The Surrey (port side) bank down to Hammersmith is still much the same. The Soap Works became Harrods Depository which is now converted to luxury apartments. The bridge is the old Hammersmith Bridge (1826-1886) which supported 12,000 people during the 1870 race. At Hammersmith (on the Middlesex or starboard side) the distillery, foundry, lead mills and oil mills are (thankfully) gone. At Barnes, the Surrey side is now built up but Middlesex retains more of its open spaces. At the finish there is no Chiswick Bridge (opened 1933) and the end is marked by the ‘Ship’ pub. Indeed, the pubs are the most unchanging landmarks. The aforementioned ‘Ship’, the ‘Bull’ at Barnes and the famous ‘Star and Garter’ at Putney all thrive today. The course is much like the sport of rowing – in some ways unchanging, in some ways always changing.”

Thank you, Tim, for this nice history piece about the Boat Race Course!