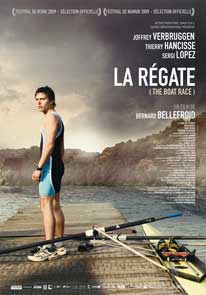 One of the loyal readers of this blog, Hélène in France, sent an e-mail earlier today, telling me about an upcoming rowing film, La Régate [The Regatta]. The film is about the fifteen year old boy, Alex, who lives alone with his aggressive father. To escape the violence, Alex takes to the oar and decides, at all costs, to win the rowing Championships of Belgium.

The film is directed by the Belgian Bernard Bellefroid, who was born in 1978. He graduated in 2003 from the National Film School of Belgium (INSAS) and has previously made documentary films. La Régate is Bellefroid’s first longer feature film, which is produced by Jean-Pierre and Luc Dardenne. It will be released in France in February 2010. However, I find it unlikely that the film will find it’s way to the U.S., which is a pity.

If you would like to get more information about this film, click here (information in French!). Many thanks to Hélène!