Chris Dodd hears an echo of romanticism on the ‘MG’.

Listening to BBC Radio 4’s Book of the Week on the cricket writer Neville Cardus (1888- 1975) took me back to my early days as a subeditor on The Guardian, which, when I started in 1965, had dropped ‘Manchester’ in its name, although the Editor still spent three weeks a month in London and one week in Manchester.

Cardus’s father was an absentee blacksmith, and his mother and aunt sold trysts on the mean streets of Manchester and Salford to make ends meet. Neville left school at 13 and his trail of jobs led to an engagement in the editor’s office of the Manchester Guardian.

In 1919, he had a breakdown, and at the start of the cricket season he was sent off to Old Trafford to get some fresh air and a change of scenery. He transformed cricket writing almost overnight by invoking atmosphere, heightening the drama of the game, and imagining what spectators were thinking and feeling. Above all, says David Kynaston in his review of Duncan Hamilton’s The Great Romantic: Cricket and the Golden Age of Neville Cardus in, where else, the Guardian, Cardus’s pen made the cricketers themselves human.

Cardus was not beyond criticism, of course. He eventually came in for a sandbagging for making up quotes. His defence was that a few chosen extra words amounted to ‘the higher truth’. It was a luxury allowed to a critic, if not a reporter. In my day, the consensus in the office was that no subject is going to recognise a change in what he or she said as long as the writer gets the sense right. That’s what sub-editors are there for.

Eventually Cardus did the same for music criticism as he did for cricket, and became the brightest star in a firmament of great Guardian sports writers and critics. The editor who hired him was Charles Prestwich Scott, famous for his dictum ‘comment is free but facts are sacred’ but less well known for drawing on his rowing experience when it came to staffing the newspaper he edited for 50 years. Martin Wainwright quoted Scott in HTBS on 21 February 2019:

A paper is built up upon their common and successive labours, and their work should never be task work, never merely dictated. They should be like a racing boat’s crew, pulling well together, each man doing his best because he likes it, and with a common and glorious goal.

Scott was captain of boats at Corpus Christi[*] during his undergraduate days at Oxford, and he reported on the Paris international regatta in 1867 for the Manchester Guardian. His family connection with the paper founded as a result of the Peterloo Massacre no doubt had something to do with his appointment as editor before he graduated. During vacations he rowed on Ullswater, and in Paris he witnessed the fishermen from St John, New Brunswick, winning in a coxless four, the incident that inspired ‘Guts’ Woodgate to design a steering contraption for Brasenose at Henley, eventually making steerspersons redundant in the regatta’s four-oared events. It is possible that Scott was at the great race between Oxford and Harvard at Putney in August 1869, attended by dozens of reporters in what must have been the biggest media event to date.

In my experience, Scott’s metaphor held good in his time and mine under his successors Alastair Hetherington and Peter Preston. Being a Guardian journalist was being a perpetual student. Cardus and John Arlott, who succeeded him as the No 1 cricket correspondent, stirred my rower’s armchair interest in cricket by telling stories. Since taking up the oar at school because I had no talent for cricket, I am to this day eager for a wet day during a Test match so that I can listen to the commentators lose themselves in hours of anecdote on the car radio. On the rowing correspondent’s beat, I try to write about rowers more than rating watches, following the Cardus path that transformed sports writing.

By his twilight days in the late 1960s, Neville was a full-blown member of the MCC, a knight of the realm and a sage of the concert halls. As a young’un in the features department, I was possibly the last sub-editor to nurse his copy into print. Cardus was the last staffer on the Guardian tolerated to deliver hand-written copy, and his prose – no doubt as a result of fractious incidents over the years – could be cut only on pain of death by the subs of the sport and features desks.

The only occasions when Cardus copy was type-written occurred during his annual visit to the Edinburgh Festival, when he had to dictate to a copytaker. He once set two of us a late night poser when his dictation included an appraisal of a young soprano as returning a ‘white elephant performance’. We thumbed through the office Groves and spent anxious minutes as the deadline approached trying to figure out what he actually meant to say. In the end my exasperated colleague said, ‘WTF, it’s a great new Cardus musical term’ and sent the review winging away to the composing room. What we didn’t know was that the old devilish Great Romantic had arranged a lunch date with the triumphant soprano next day, setting her up by describing her performance as ‘quite eloquent’.

Before I have even seen a copy of Hamilton’s book, I am transported back to the writers and editors whom I encountered in the 60s and 70s – which is to take nothing away from the present bunch who attempt to maintain the Guardian’s literary reporting of sport (but whatever happened to the rowing coverage? – Ed) and the arts. John Arlott once lunched me at the Oval for four courses with four appropriate wines – his portfolio at the Guardian included wine correspondent – before excusing himself to return to the commentary box, where he flawlessly growled away into the evening before filing a perfect account of the day’s play to the paper.

The golf correspondent, Pat Ward-Thomas, would tell of the night he flew his Lancaster bomber to the Swiss border instead of East Anglia after he had dropped his load, eventually pancaking into the North Sea when the fuel ran out. Harold Mather, the rugby league man, could occasionally be persuaded to recount his sorties as a Lancaster rear gunner. He wrote like a rear gunner, too. No time for syntax. David Gray would file thousand upon thousand of velvet words from Wimbledon. David ‘Bootlaces’ Lacey’s reports sometimes mercifully contained more about films than football, and David Frost wrote rugby union like the eloquent schoolmaster he had been. Frank Keating was a loveable softie who outclassed all of us with his awe and wonder at the Olympic champions or nippers playing hopscotch in the park.

On the music side, Philip Hope-Wallace could turn opera on its head, and on a memorable occasion after a features department Christmas lunch that morphed into the afternoon in El Vino’s, abandoned the performance he was reviewing that evening at half time, only to discover when he opened next morning’s papers that the second half had been completely changed.

Sorry, I’m being carried away, not only by Cardus, but by the upcoming wake for Bill Webb, the former literary editor, who in the days when contacting the office involved finding a call box and four pennies used to disappear behind the Iron Curtain for weeks at a time to interview East European writers and intellectuals, uninterrupted by editors demanding copy.

Journalists on the Manchester Guardian need not, of course, agree on every point, said Editor Scott, but they should share in the general purpose and inheritance. Long may they do so. Scott’s other claim to fame, by the way, is that he is the most recent and only rowing correspondent of the ‘MG’ to be elevated to the editor’s chair, a record that has so far lasted 150 years. 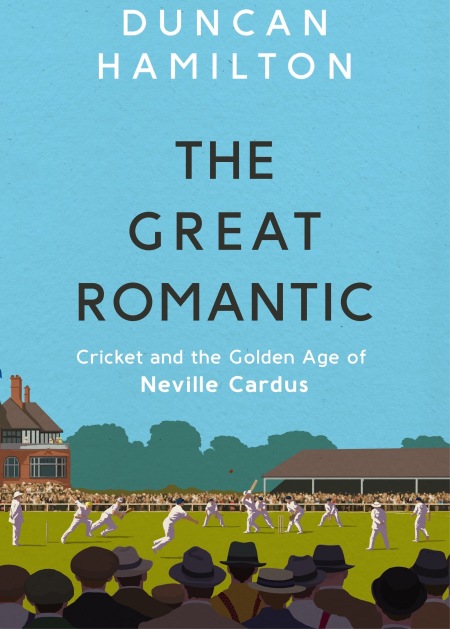 The Great Romantic: Cricket and the Golden Age of Neville Cardus by Duncan Hamilton, Hodder, 2019.

A Field of Tents and Waving Colours, a selection of Cardus essays and reportage by Gideon Haigh, Safe Haven, 2019.

*Editor’s update [my bad]: Although I was tempted to keep the extra ‘e’ in Corpus Christie only to keep the wittiness in David’s comment below, I feel I have an obligation to the readers, especially those with a connection to Corpus Christi, to  correct my sloppy edit of Chris’s fine article. Thank you, David!