Beyond the Stewards’ Enclosure: Part II – The Picnic

Here HTBS contributor William O’Chee continues exploring at Henley Royal Regatta to document what happens beyond the Stewards’ Enclosure. Part I is here.

Every fat coxswain loves a picnic, so as a confirmed fat coxswain, for me no trip to Henley Royal Regatta can be complete without a good picnic.

An Australian friend – visiting Henley for the first time, and armed with a fistful of Stewards’ tickets – grandly told me that picnics are not allowed in the Stewards’ Enclosure. All the more reason to leave the bounds of the blue and white awnings in search of plentiful food, and a bevy of pretty girls or handsome boys, depending upon your point of view. In actual fact, there is a lot of eating happening at Henley, and a lot of drinking as well. Pimm’s is the usual fare, but it is frightfully expensive in the enclosures. Those who picnic are definitely financially savvy.

However, the real glory of the picnic is not financial. A picnic is in fact the embodiment of everything that makes up the five most glorious days of the English Summer. It can be as grand or as humble as you please. Foie gras or pork pie, it makes no difference. Shoes and ties discarded, toes dangling in the water, it is the perfect antidote for stuffiness.

Notwithstanding some preconceptions, Henley Royal Regatta is remarkably egalitarian. There is a place for everyone. While rowing’s grandees are ensconced in Leander, and the connected people are in the Stewards’ Enclosure and Remenham, there is no end of other opportunities, many without a ticket price at all. Henley gives everyone the same chance to see the spectacle no matter how much or little they pay.

Along the bank below the Regatta Enclosure, the towpath is littered with picnics of all kind. Some are definitely well organised. I came across one group who were feasting on an assortment of chicken, ham, cold meats, pasta salad, hard boiled eggs and cheese – with champagne in real glasses to boot! Others are more haphazard. Sometime a bag of crisps and some drinks are all that is necessary. 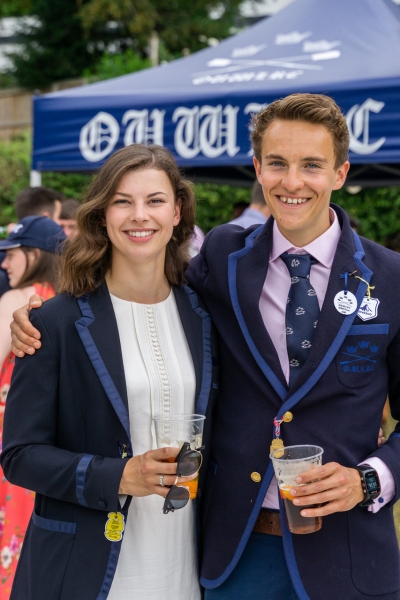 Away from the towpath, the verdant expanses of the Remenham Lane and Lion Meadow are home to many club picnics, which are organised months in advance, and serve as reunions bringing together old oars and their more recent successors. I was headed for arguably one of the best of these, the annual soiree of the Oxford University men’s and women’s lightweights.

This comprises past and present members of the two Lightweight Blue Boats, and their reserve crews, Nephthys and Tehtys. Beneath an unmistakable dark blue gazebo emblazoned with the women’s

O.U.W.L.R.C. insignia lay a feast of prodigious proportions. Surprisingly, I have no photos of this spread because only a brave man stands between a lightweight and food!

The last few years have seen Oxford’s men’s lightweight rowing programme in the ascendancy, medalling at the European University Games, and the British Championships, while they recorded a memorable win this year over their Cambridge rivals on the Tideway. With the women being just as successful, there was ample reason for celebration.

Naturally there were some eye-catching blazers – although mostly in variations on the university’s revered Oxford Blue – and some even more colourful ties.

More colourful still were some of the tales from since the Lightweight Boat Race was instituted 44 years ago. The best I heard was of the two time Oxford Lightweight Blue Boat oarsman who was sent down (expelled) for not doing enough work. He secured a place at Cambridge, where he also rowed in their Lightweight Blue Boat, and is now a QC!

After almost three hours of good company, it was time to move on and discover what other prandial pleasures might be on offer. Not far away, I found Oxford’s erstwhile rivals having their own picnic. My opinion is they need to do a bit of work to catch up on the culinary front, though.

It is over a century since Henley’s first international entry in 1870, and these days the event is most assuredly international. That means the spectators are equally international. I even came across a number of Australians who were enjoying the racing.

Down near the start, I discovered an assortment of temporary bars open to the public that offer drinks and food, served behind white picket fences. There might be fewer cognoscenti on hand, and the dress might be a little more relaxed that at the other end of the course, but the picnickers down at the start seem to enjoy their time at Henley as much as anyone else.

The prize for the most elegant luncheon, however, belongs to the four ladies and their gentleman escort who staked a place on the boom beside the progress board for their parasoled picnic in this charming Italian gondola.

They seem a little out of place, but maybe not. Venice may be the most serene of cities, but Henley is the undoubtedly the most charming of regattas.