Today is Anzac Day in Australia.

This story not only remembers and pays tribute to Captain Keith Heritage MC but to all rowers, families and friends around the world who died or suffered from the Great War.

The Heritage family story reads like many others of the time. Keith’s grandfather, James Heritage, stole a book in Somerset, England, and later, after days without food, took a silver plate worth £5 (over $600 today). For these crimes, he was transported as a convict to Van Diemen’s Land, as Tasmania was called then. He served his time, trained as a draper’s assistant, married and had three children.

One of James Heritage’s sons, George, became a teacher in 1871 and went on to be Tasmania’s Inspector of Schools and helped revamp the island’s education system. George and his wife Eleanora Heritage had five boys, who ended up fighting for the Empire in World War I. Three were decorated for heroism under fire and four came home. One of their sons, the subject of this story, was Keith Heritage.

Keith was born on 16 September 1882. He was one of eight children. At the age of 9, Heritage was at the Sacred Heart School, winning a prize for second in Arithmetic. At the age of 14, Heritage had won a music prize at the local Launceston Mechanics Institute, with his father giving out the prizes.

Rowing
Keith Heritage was an accomplished rower, who competed with winning crews in competitions across Australia and at Henley Royal Regatta in England.

Heritage’s rowing experience was gained with the Tamar Rowing Club in Launceston. He was in a crew that was defeated by a second club crew for scratch fours on 6 December 1902. Later in early January of 1903, his crew won the Maiden Fours at the Mersey Regatta. Later in the year, Heritage was hotly contesting a number of Junior Pairs and Single Scull races. At the Tasmanian Rowing Association Championships in April 1904, Tamar RC won the Championship Fours with Heritage in 3 seat.

Heritage went on to win many races and he often represented the North in races against the South, almost invariably occupying the 7 seat in an eight. The rivalry between the two regions of the smallest state of Australia was remarkable.

By 1905, Keith Heritage represented Tasmania in the 29th Men’s Interstate Eight-Oared Championship (forerunner of the King’s Cup) in the 7 seat, with the crew coming second to Victoria. 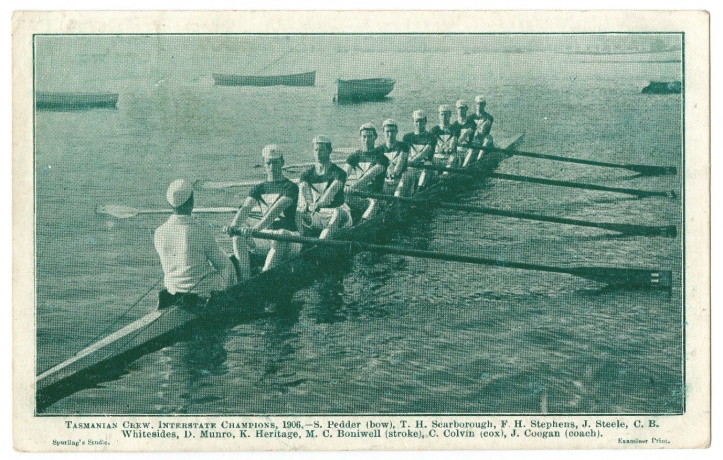 Heritage was not in a crew for the next two years, but in 1909 at the Interstate Eight-Oared Championships he was back in his old spot, with another win for Tasmania. 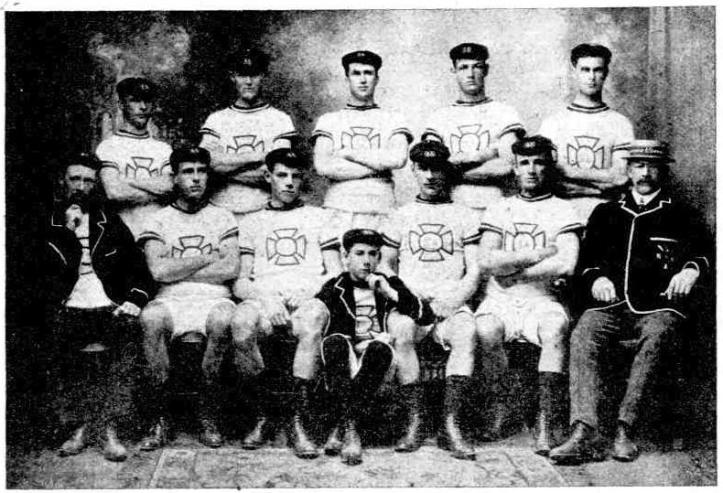 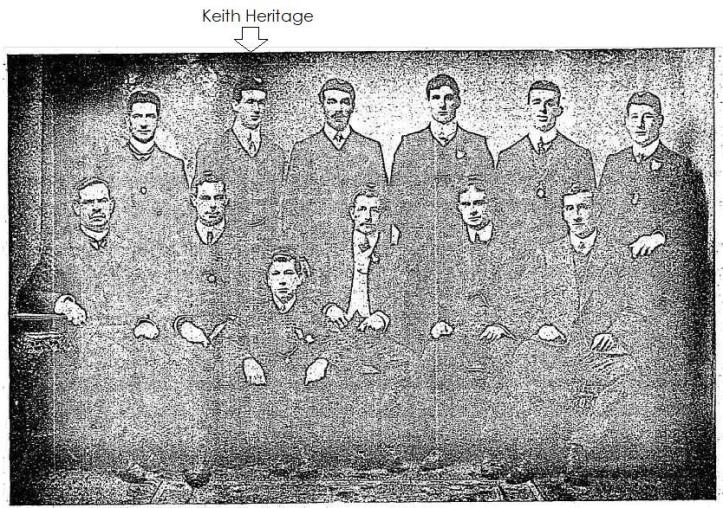 At the 1910 Nationals on the Upper Derwent, Tasmania came third, with NSW winning and Victoria second. The consolation at this regatta was that the Tasmanian Cecil McVilly became the Australian Sculling Champion.

By the 1911 Nationals, Heritage had moved to Sydney and was rowing from the Sydney Rowing Club in Abbotsford. This meant he could row for New South Wales on the Parramatta River at the Interstate Eight-Oar championship and, again, in a winning crew in 7 seat. 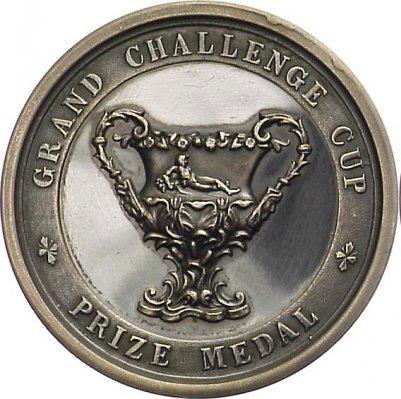 Heritage was named as a reserve for the Stockholm Olympics in 1912. However, dropping the enthusiastic Tasmanian from the crew in favour of Hugh K. Ward was widely considered a mistake and the Australian eight were beaten in the quarterfinals by the British Leander crew, the same crew which the Australians had beaten a few weeks before.

There is a funny story of Heritage meeting the King Gustaf V of Sweden:

In October 1913, Heritage was still racing in a Sydney RC four, but not with much success: 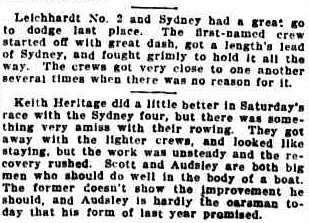 In March 1914, there were the beginnings of plans for the 1916 Olympics to be held in Germany. Heritage was listed as a possible rower.

Rowing events were being planned for late 1914, but the dark clouds of war were to diminish the interest in racing and rob the rowing fraternity of its best.

Australia did not formally declare war with Germany following Britain’s declaration of war on 4 August 1914. At the time, the Australian Constitution did not expressly provide for who could declare war. In fact, Chief Justice Isaacs said:

So the die was cast for Australians to participate in a war half-way around the world when King George V accepted the advice of Prime Minister Asquith.

Both Australian Prime Minister Joseph Cook and opposition leader Andrew Fisher, who were in the midst of an election campaign, pledged full support for Britain. Days before the declaration, Fisher (ALP) famously declared:

… should the worst happen, after everything has been done that honour will permit, Australians will stand beside the mother country to help and defend her to our last man and our last shilling.

Unlike the other countries engaged in World War I, conscription was not introduced in Australia. All the Australians who fought in World War I were volunteers.

Defence records show that the first to volunteer was a champion rower from Tasmania who was to be decorated for ‘cool courage’ under fire and later killed performing an act of kindness to his men. That volunteer was Keith Heritage who was close to his 32nd birthday.

Military Service
Keith Heritage had done some part-time military service with a local unit in Tasmania, including five years with the Tasmanian Infantry Regiment as a Sergeant in the machine gun section and six years with the Launceston Rifle Regiment. 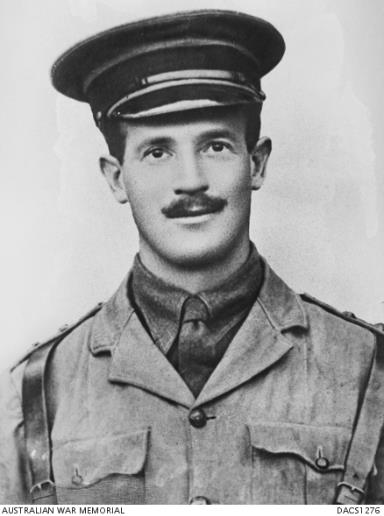 In the years before World War I, Heritage lived in Sydney, where he worked as a traffic manager of the Union Steam Ship Company.

Keith Heritage is reported to be the first volunteer to step forward at the Sydney Showground on 11 August 1914 to fight against Germany. He was commissioned into the Australian Naval and Military Expeditionary Force (ANMEF) rather than with the well-known Australian Imperial Force (AIF), with the rank of Lieutenant.

As with other sporting bodies, the rowing men provided their quota of warriors, with Heritage obviously having discussed enlisting with his Sydney RC colleagues since R.L.R. Rabett, V.H.B. Sampson, and S. Wellisch also joined by the following weeks.

Heritage sailed on the HMAT Berrima on 17 August 1914 to Rabaul, German New Guinea. This was the first significant Australian action of the World War I. The ANMEF’s landed on Rabaul on 11 September 1914 at the Battle of Bita Paka. This effort secured the German communications facility in the region. He became supply and transport officer to the British Administration in Rabaul. He was joined by his brother, Brigade Major F. B. Heritage.

After that campaign, in which Australian forces suffered their first casualties of the war, Heritage returned to Australia. He joined the newly formed Australian Imperial Force and was posted to the 19th Battalion, 2nd Reinforcement. 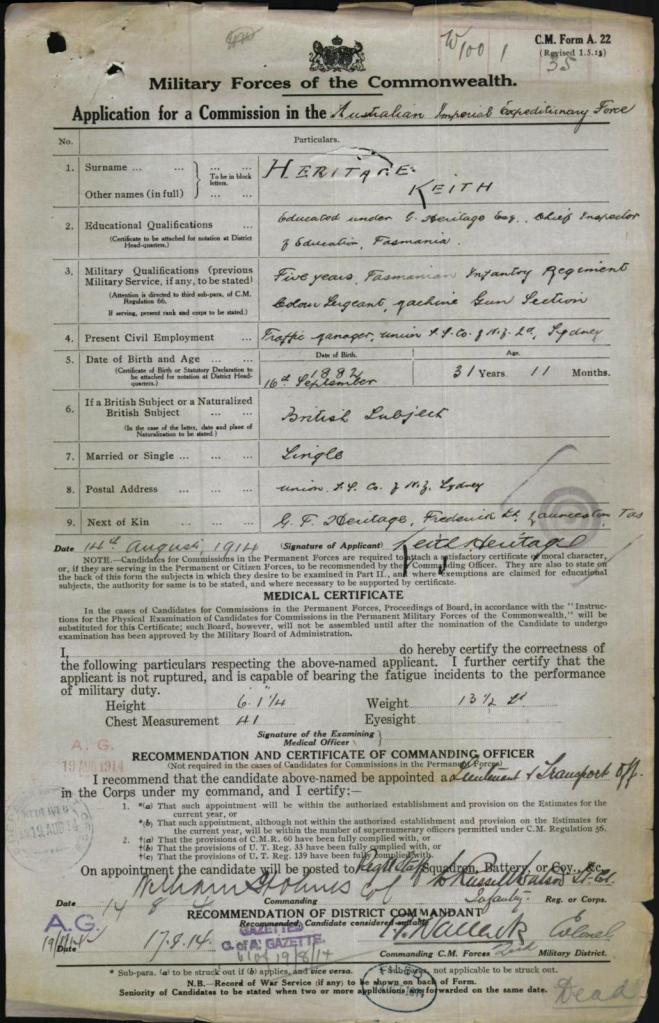 Lieutenant Heritage disembarked Sydney on 19 June 1915 on the HMAT Kanowna A61 and went with the battalion to Gallipoli in August and served there for several months until the ANZAC force was evacuated.

He was commended for his work helping plan the troops’ departure under cover of darkness. Heritage is said to have been one of the last of the ANZAC forces evacuated from Gallipoli on 19 December 1915; ‘Joe Maude’, the Sandhurst nickname of Lieutenant General Sir Frederick Stanley Maude, was the last Allied soldier to step off the Gallipoli Peninsula in the early morning of 9 January 1916.

Then Heritage was sent to Egypt to help defend the Suez Canal. He then went on to the Western Front in the first Australian contingent to land in France after being promoted to Captain. At midnight on the night of 25/26 June, a party that consisted of 40 officers and men was led by Captain Heritage and they carried out a raid that had been planned by the Australian Major General William Holmes on the forward trenches of the 231st Prussian reserve infantry regiment. The German position was near Amentières. The Diggers stormed into the trenches, killing 20 enemy soldiers.

Planning to get in and out before the Germans could counter-attack, they occupied the trenches for just five minutes and blew up two munitions stores. They also captured four prisoners to be taken back to the Allied lines for interrogation. Heritage ordered his men back to the Australian positions and waited in the German trench until the rest of his patrol was on its way. By this time the main enemy force was fully alerted to what was happening and poured fire towards the Australians. As the last man to leave the enemy trench, Captain Heritage came across a badly wounded Australian soldier, who was lying in no-man’s land. Heritage hauled the 12-stone (76 kg) soldier on to his back and carried him to the Australian positions through an intense artillery bombardment. He was the last man of the party to leave the hostile trench. His action earned him the Military Cross for gallantry, dash and leadership. 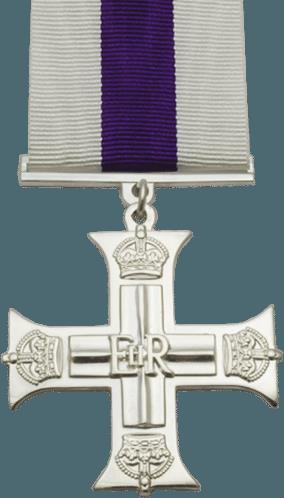 On 25 August, the official London Gazette published details of the award ‘for conspicuous gallantry during a raid on the enemy’s trenches’.

‘About 20 of the enemy were killed and four prisoners taken,’ the official account said. ‘He carried back a wounded man single-handed, and throughout the raid set a fine example of cool courage.’

The citation was republished on 30 November in the Australian Commonwealth Gazette. 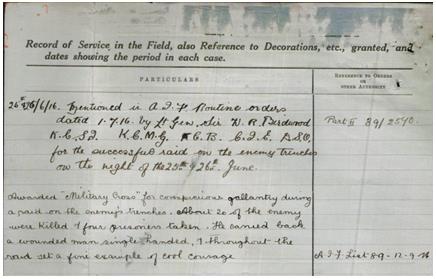 Sadly, by the time the award was gazetted, Captain Heritage was dead. On 26 July, he was in the trenches with his battalion at Pozières, France, and while making his inspection round, he noticed that two of the soldiers on guard appeared exhausted. Captain Heritage told them to get a few hours’ sleep and took over their sentry duty. He also gave them some of his own food, which was scarce because supply routes to the unit had been blocked by heavy shell fire. As the two men lay down to rest nearby, a high-explosive shell landed near Captain Heritage, killing him almost immediately. He was 33 years and 10 months old.

According to a statement by Lieutenant L. Layton-Smith:

Captain Heritage was killed outright at Pozieres on 26 July 1916. He was buried in the field at Pozieres and a cross was erected over his grave. This however may now have disappeared in view of the subsequent fighting which took place on that ground in 1918.

During World War I, about 60,000 Australian soldiers died in conflict. Sadly, the bodies of only two were ever returned to Australia: the ‘unknown Australian soldier’, who lies at the Australian War Memorial in Canberra, and Major General William Throsby Bridges.

Heritage’s family and friends had heard news of his award for heroism days before news of his death reached Australia. The Launceston Examiner (1 September 1916, page 4) wrote:

Word was received … today that Captain Keith Heritage who, it was recently announced, had been awarded the Military Cross, was killed in action on July 26.

Like many who had fallen, Keith was a bachelor. His personal effects and correspondence were dealt with by his father. 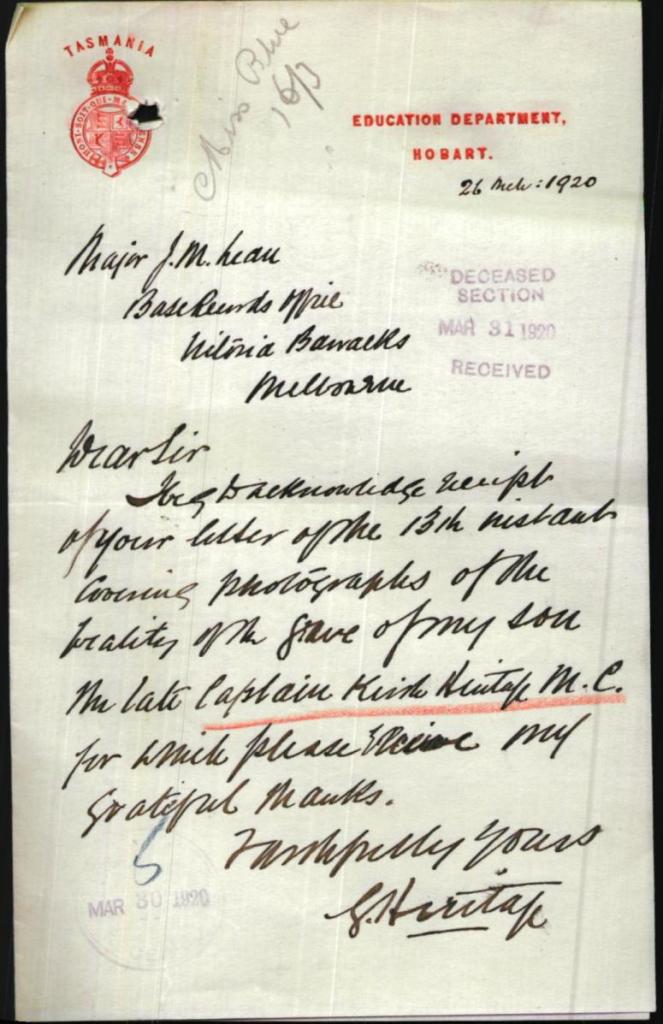 Family war service
Keith Heritage’s sister, a nurse at St Joseph’s Hospital in Auburn, Sydney, was celebrating her brother’s medal by wearing the colours of the 19th Battalion at work. As she was dressing a patient, she noticed on the bed the newspaper story announcing her brother’s death and collapsed in shock. 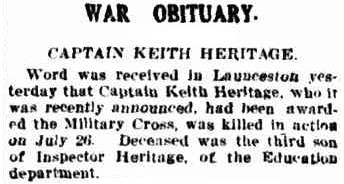 Of George Heritage’s five sons, who served on the Western Front, four survived the war.

Francis Bede Heritage was Director of Musketry Training and later headed the Royal Military College, Duntroon. F. B. Heritage was awarded the French Croix de Guerre in 1919. He retired as Army Quartermaster-General.

Lieutenant Austin Heritage of the 12th Battalion, received the Military Cross for heroism while leading his men in an attack on a heavily defended position and rallying them while wounded and under heavy fire.

The fifth brother, Stanley Heritage, was working in Nevada, USA, when the war broke out. He went north to join the 99th Canadian forces.

On ANZAC Day, many stories of courage and sacrifice will be told. Let us remember Captain Heritage MC and all those Australians and New Zealanders who have been in service, as well as those currently serving.

We will remember them. Lest We Forget.