On International Women’s Day, Tim Koch makes his yearly gesture to half of the world’s population.

Since 2014, I have annually risked accusations of tokenism by marking International Women’s Day (IWD) with a special post on some aspect of women’s rowing. If necessary, I could defend myself by pointing out that, for the historical period that HTBS is most interested in, it was privileged old white men, generally sporting frighteningly large moustaches, who were in charge, both on the water and off. Even when those of a different class, age, colour or gender did somehow manage to get afloat, their activities were much less likely to be recorded. However, perhaps women’s rowing during the 20th century was not as rare as my sparse coverage may suggest.

I posted three pieces for IWD 2018: historic images; suffragettes and sport; and Furnivall Sculling Club.  In these, I noted that the first collegiate rowing programme for women was established at Wellesley College, Massachusetts, USA, in 1875 (I do not know if ‘crew’ has run continuously at Wellesley from that time). The ZLAC Rowing Club in San Diego, California, claims to be the world’s oldest continuously existing all-women’s rowing club, having been founded in 1892. Cambridge University’s women-only Newnham College dates its boat club from 1893. Britain’s Hammersmith Sculling Club (later Furnivall SC) was founded for women in 1896, but it has admitted men since 1901. What is now called the Sydney Women’s Rowing Club started in 1910. All this produced two interesting posts in the comments columns.

Peter Budz said that ‘Hellerup Dameroklub, Copenhagen, Denmark, was founded 1901 and is still going strong’. Also, ‘Lee’ wrote ‘Germany’s oldest (existing) rowing club for women is Lübecker Frauen-Ruder-Gesellschaft, founded in 1907. The City of Lubbock also has a second women’s club, Lübecker Frauen-Ruder-Klub (founded in 1926). Both remain women only and have not merged with their male counterparts, though both share boathouses with men’s clubs’.

The history section of the Hellerup Dameroklub website has a brief and quirky summary of the club and its activities since it was founded. I have left the version produced from the original Danish by ‘Google Translate’ mostly in its original form as it has a certain charm:

More than five generations of women since the start in 1901 have rowed at the club.

First, the pioneer generation, which experienced the struggle for women’s electoral rights, smoked cigars, laid off the corset and searched for new paths into a sport that had so far been reserved for men.

The 1930s and 1940s liberated young women, and rowing was the ideal platform for a life of ‘jazz, sea, and (perhaps) lovemaking’.

The women of the 1950s and 1960s fulfilled the dream of the pioneer generation that women’s gender should be a serious sport with room for both elite and breadth.

In the 1970s, it was the mature women who wanted to calm down. Those who wanted to relax became veterans and those who did not want to reconcile exercise and fun during the breaks between the job and the family.

Today another generation has arrived. It is women who both need personal space and who will be in good shape. Women who roam far in the summer and keep their shape right in the rowing machine in the winter darkness.

While most of us will find our Danish a little too basic to read the texts, there are two Hellerup Dameroklub histories online that are worth looking at for the pictures alone. One covers the period 1901 to 1926, the other, the years 1901 to 2001.

Travelling north from Denmark to Germany, I consulted the German Wikipedia page titled ‘Frauenruderverein’. Again relying on ‘Google Translate’, I have edited/plagiarised the section on the chronology of German women’s rowing clubs and added a little more detail from the rest of the article and from some of the websites of the clubs mentioned:

1884: Some men of the Berlin Touring Rowing Club gave women rowing lessons – but would not admit them as club members. Therefore, the middle-class women decided to organise themselves and initiated their own clubs under the Women’s Rowing Association (DDRV).

1894: The first women’s rowing club in Germany was the Berliner Damenruderverein Deutsche Amazonenflotte (DAF). However, the club did not last long as its emphasis was social rather than sporting. Also short-lived was ‘Spreeklub’, another women’s rowing club founded around the same time.

1901: The Friedrichshagener Damen-Ruderclub (FDRC) was founded by ‘four ladies’ and was based in Grünau, Berlin. They later purchased their own boathouse on the Teltow Canal, south of Berlin, but this had to be abandoned after 1945. In 1950, the club was established again, this time in Spandau, Berlin. In 1977, the club decided to disband and join the Women’s Rowing Club Wannsee, Berlin.

1907: Lübeck Women’s Rowing Society of 1907 (LFRG): Since the dissolution of the FDRC, the LFRG is considered the oldest of the four existing ‘women only’ rowing clubs in Germany.

The text of the above article starts:

One of the pleasant accompaniments of the current women’s movement is the growing participation of the beautiful sex in any kind of sport. Why would you provide for new earning opportunities for women without taking care of a healthy body which is fit for the challenges of these jobs? But even for the large percentage of women who will sooner or later trade their chosen job for marriage, any exercise in their youth will not be in vain and healthy mothers are the most important thing a nation needs…

Today, the club still has ‘Frauen’ in its title but its website says ‘small, tall, old, young, thin, deaf, men, women – all are welcome in the CFRV’.

1917: Dresdner Women’s Rowing Club. In 1930, it built its own boathouse but this was the only such building to survive the wartime bombing and it was taken over by the men of Dresdner Ruderverein.

1925: Hamburger Rowing Club (HRC): The club is the second oldest, and the largest, of Germany’s current four rowing clubs that are exclusively for women.

1926: Lübeck Women’s Rowing Club (LFRK): The club emerged from a ladies’ section established in 1919 in the Lübeck Rowing Club. It is considered the third oldest of the four ‘women only’ clubs.

1927: Women’s Rowing Club Freiweg: Based in Frankfurt am Main, the club now has the slogan ‘The rowing club not just for women.’ Men were admitted as leisure rowers in 1968 and as racing members in 2000. Its website says:

Although we are no longer purely a women’s rowing club, the name has been preserved in our club name and stands for the promotion of women and girls in rowing. In keeping with tradition and the ‘club philosophy’, women also set the tone and represent a majority of the board…

1947: Women’s Rowing Club Wannsee (FRCW): The youngest of Germany’s four exclusively female clubs. In 1977, they were joined by the members of the 1901 Friedrichshagener Damen-Ruderclub.

Despite all these clubs having long histories, the title of the oldest continuously existing and currently operating women’s rowing club still seems to be held by ZLAC in San Diego. Their website tells us:

At a time when San Diego was still a sleepy little town, four adventuresome young women who spent hours rowing together on the bay, decided to start a club. These four San Diego women, Zulette Lamb, Lena Polhamus, Agnes Polhamus, and Caroline Polhamus, who used the initials of their first names to form the acronym, ZLAC, founded ZLAC Rowing Club in 1892, a time when a rowing club for women was a completely new idea.

Looking at the following images from the ZLAC Facebook and Instagram pages, the founders would still be proud of the club today: 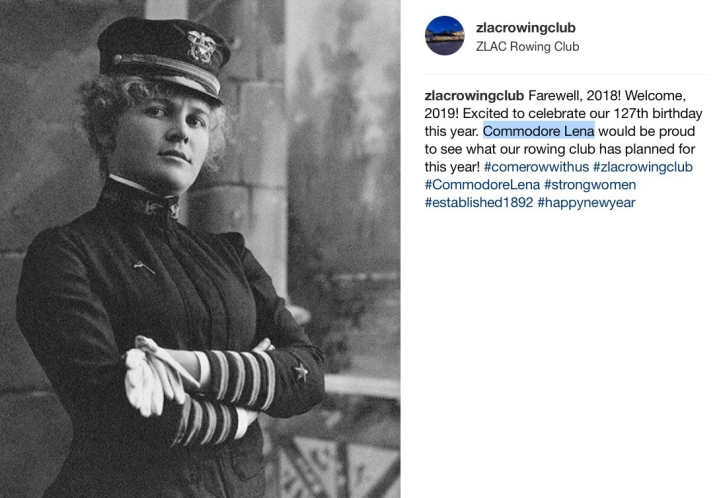 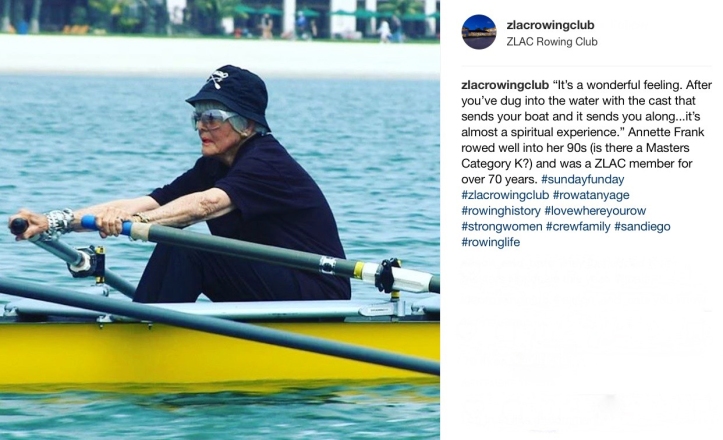 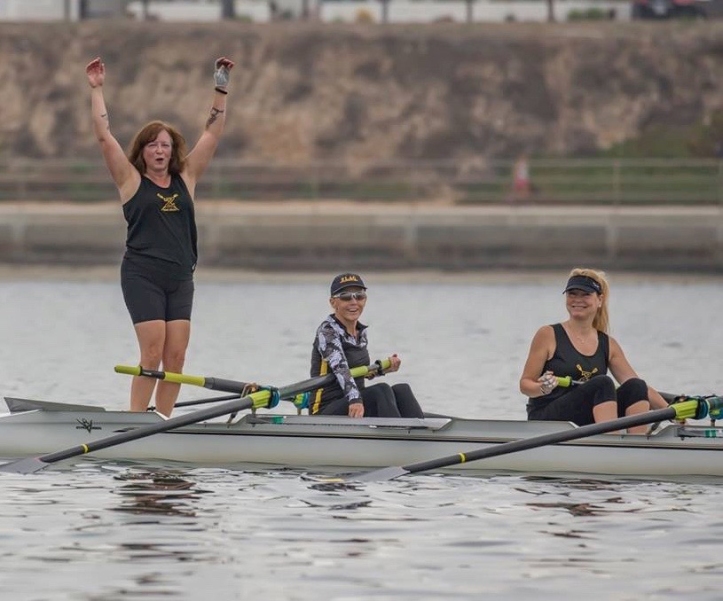 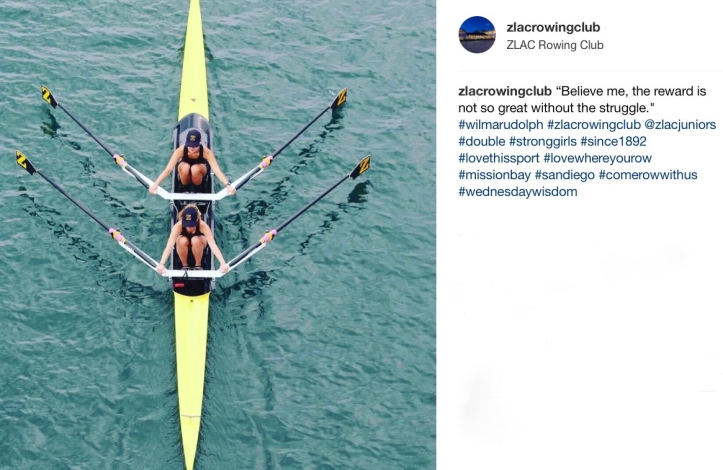 Thanks to Stephan Ploke for his help.