What since 1901 has been known as Furnivall Sculling Club (FSC) has an important place in the history of women’s rowing. It was founded in 1896 by the great Victorian polymath, reformer and evangelist for sculling, Dr Frederick James Furnivall, as the Hammersmith Sculling Club for Girls. In the words of Elizabeth Carter, author of the official club history*:

Passionately opposed to any form of discrimination, social or otherwise, including the exclusion of women from river sport, (Dr Furnivall) founded the club for the benefit of single working girls in London, keen to introduce into their otherwise restricted lives what he called ‘healthy outdoor activity’ as well as opportunities for fun and sociability.

Carter is eager to correct a common misunderstanding about the club’s early membership, that the girls were all ‘working class’:

To Furnivall, the notion of ‘working class’ would have been complete anathema; to him such notions were unacceptable… When he said was that the club was for ‘working girls’, he was describing their economic status, not social position…

Though a passionate sculler from a young age, Furnivall was over 70 when he founded the club. However, this bold and controversial move was simply part of a lifetime of radical activity. He was one of the founders of the Working Men’s College; he established the National Amateur Rowing Association in response to class discrimination in the sport; he once sold his book collection and gave the money to striking woodcutters; he was a vegetarian who neither smoked nor drank alcohol. It was little wonder that he could persuade a kindred spirit, George Bernard Shaw, to donate a boat.

While the club’s single-sex status only lasted until 1901, the rule that the captain had to be a woman and that ‘girls’ had to comprise half of the club committee plus one continued until the 1939 – 1945 War. After that time, the club was still distinctive in that it was mixed in a time of largely men-only clubs, but the men were very much in charge until the modern era.

Of all existing rowing clubs, perhaps Furnivall can claim to be the first to be initially established as an open club for women. The club history calls it ‘the world’s first sculling club for women’. The women-only Wellesley College in Massachusetts had a rowing programme in 1875 but I do not know if ‘crew’ has run continuously at Wellesley from that time. The ZLAC Rowing Club in San Diego, California, claims to be the world’s oldest continuously existing all-women’s rowing club, having been founded in 1892. Cambridge University’s women-only Newnham College dates its boat club from 1893.  What is now called the Sydney Women’s Rowing Club started in 1910.

I recently acquired a copy of the ‘Royal’ magazine from 1903 which contains a nice article which captures the pleasure that the rare chance to scull gave FSC’s female members. Although the use of ‘Amazons’ in the title, ‘Amazons Afloat’, sounds unfavourable to us today, I think that the writer simply used it to mean ‘athletic women’. As with all HTBS pictures, click to enlarge. 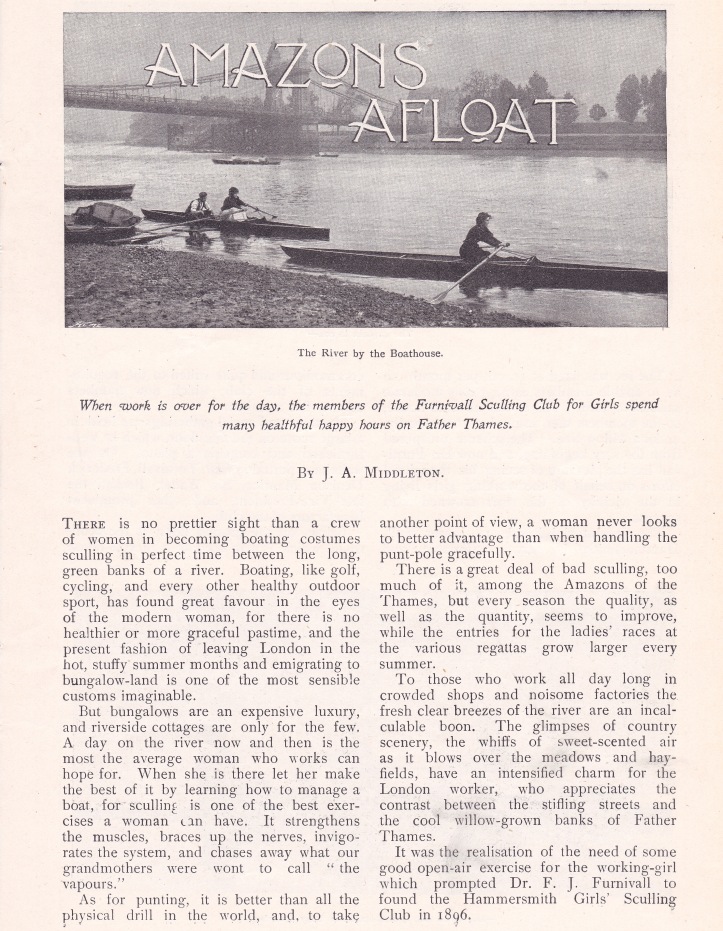 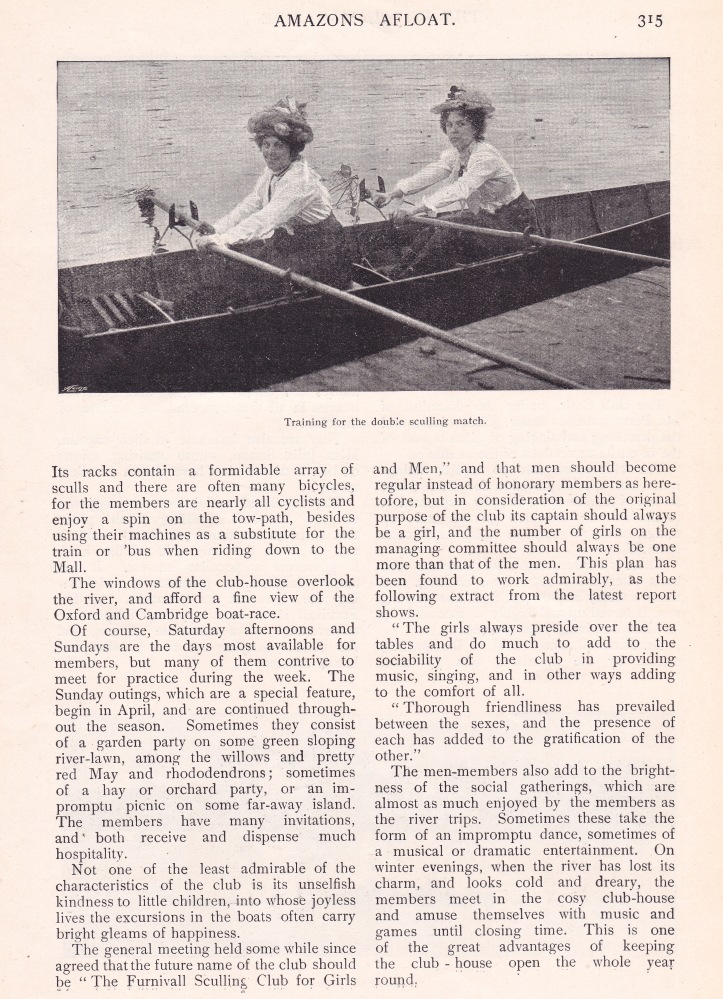 The Furnivall website has a brief history of the club and a gallery of historic club photos.

When Jessie Currie was about to first meet the good doctor, she was warned:

After Furnivall’s death, The Spectator wrote:

The Thames was Furnivall’s passion. He organised a sculling club in which men and women met to row and picnic and dance and sing, and for years they all submitted dutifully to the autocratic-democratic rule of Furnivall. The greater part of its members acknowledged that it was Furnivall who had found for them the joy of the river which they would never have discovered for themselves.

Not a bad epitaph.