Chris Dodd delves into a welcome biography of the president who shaped World Rowing.

What a joy it is to have an excuse to remember Thomi Keller, as if we could ever forget him. Thomi was president of FISA, the international rowing federation, from 1958 until his untimely death in September 1989 – just before the breach of the Berlin Wall and the Iron Curtain brought an end to both the Cold War and to the East-West eyeballing in the Olympics. For 30 years he piloted rowing – a founding sport in the modern Olympics – to a position of strength in the international arena by championing fairness and family values. 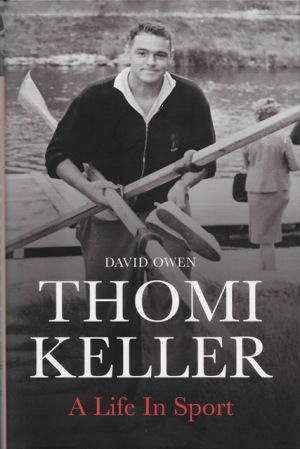 The excuse is provided by David Owen, who has written a timely, incisive and entertaining biography of Thomi, subtitled ‘a life in sport’. His book sets out the turning points that shaped Thomi’s life and opened his path to become one of the most powerful power brokers in the arena. Briefly, these are the death of his father when Thomi was only six; the Swiss Olympic Committee’s last-minute boycott of the Melbourne Games in 1956 that deprived Thomi, and the rowing team of which he was a potential medallist, from ever competing in the Olympics; his failure – by design or circumstance, who knows – to be elected to the International Olympic Committee in 1968.

All of these put Thomi in a blue mood. His father’s death at the paws of a lion was traumatic. The Melbourne boycott gave Thomi the athlete a lifelong determination to resist interference of politics in sport. The IOC non-election (and therefore the blocking of the possibility of succeeding Avery Brundage as president) consolidated Thomi’s twin power bases of FISA, which he took from strength to strength, and the association of summer Olympic sports (GAIF) that he presided over to make the case for the international federations to make their own rules and kick the IOC into the 20th century. Not that Thomi approved of the invasion of television, sponsorship and commercialism into amateur sport. But he recognised that the IOC, GAIF and FISA must adapt or die, and as far as he was concerned, dying was not an option.

Owen unfolds and dissects the Keller brokerage through the Byzantine corridors of sporting power. Rowing is fortunate in that its president of 30 years never neglected the sport that he loved above all others. Thomi set out from Day 1 to improve the quality of umpiring, the infrastructure of courses, the organisation of regattas, and the future direction of rowing, including the necessity of growing its participation and ensuring that it has an Olympic future. Throughout, he showed a talent for recruiting talented helpers for his commissions while diplomatically balancing East and West during the Cold War. He avoided the expulsion of rowing’s anti-apartheid South African federation by persuading the South Africans not to stir matters by entering representative crews at championships while apartheid lasted. He banned national anthems and flags from FISA medal ceremonies and successfully resisted their re-introduction.

He also recognised that Olympic television money was FISA’s best bet as an income stream, and that staying on the right side of the Olympics meant increasing the federation’s membership. This was achieved partly by tapping money from Olympic Solidarity in the 1980s to fund a development programme designed by Thor Nilsen that now embraces five continents. Thomi recognised that events for lightweights were key to the success of this, particularly in Asia. He was instrumental in adding women’s events to the Olympic programme in 1976.

Through his life at the helm, Thomi Keller followed just about every Olympic, World Championship and World Cup race on the bank. He was a handsome, articulate man with great presence but no arrogance. He believed passionately that the athlete comes first and deserves fair racing conditions and fair treatment, and he knew hundreds of them by first name. While not suffering fools, he treated everyone with courtesy.

I was fortunate to follow rowing as a journalist during Thomi’s last 20 years, thus observing him at first hand. I enjoyed his company, his command of a congress in several languages – often switching in mid-sentence – and his screeching from the towpath at an errant crew or official. The final tragedy of Thomi’s life for me is the bad timing of his sudden death soon after attending the 1989 World Championships in Bled. During Henley Regatta earlier in that year – where Thomi enjoyed the life of a Steward without having to run the show – he had commissioned me to write The Story of World Rowing (published by Stanley Paul in 1992). His departure just as I was about to start work deprived the book of many stories from the horse’s mouth.

Thomi travelled the world, most of the time living out of a suitcase, on behalf of rowing. Among his enormous legacy is the Keller Library at the River & Rowing Museum at Henley, while his sculling boat Pourquoi Pas is in the museum’s boat collection. Much of what we experience today in World Rowing can be traced to him. The Story of Worldwise Thomi was waiting to be told, and David Owen, at the behest of Thomi’s son Dominik, has done it with panache. Go read it.

All the illustrations in this article are from Thomi Keller, A Life In Sport.