Fragments of the True Oar

Students of history will know that the medieval world was awash with fake relics of the saints. In fact, this was not merely a medieval phenomenon, but an ancient one. Just twenty years after the building of the Church of the Holy Sepulchre in the 4th century, St Cyril complained that there were so many purported fragments of the True Cross that “The whole world has since been filled with pieces of the wood of the cross.”

Judging by the plethora of fake rowing memorabilia on sale on sites such as eBay, it would seem like all of those fragments of the True Cross have been turned into rowing oars, and other items designed to dupe the gullible and ill-advised.

One item that came to the attention of this correspondent recently was perhaps the worst rowing fake ever produced. Offered for sale by an art dealer in Florida is an honour board purporting to be a genuine piece of Oxford University rowing history from 1932. 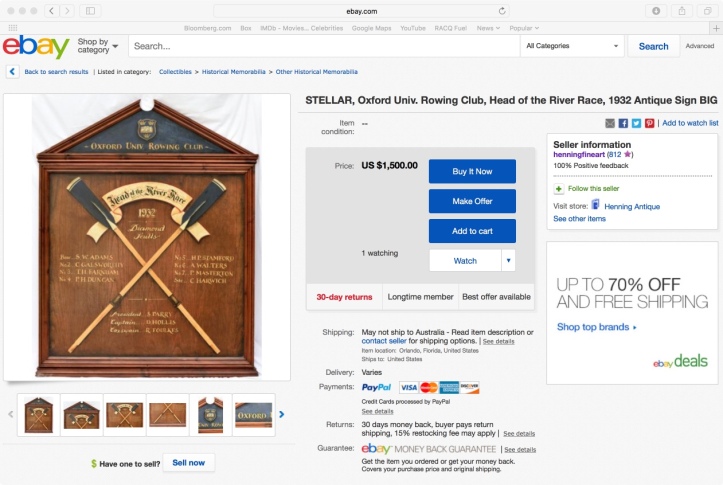 As fakes go, it could hardly be more ham fisted. About the only thing that looks right with this is the university coat of arms at the top. From there it is a litany of errors.

The board also claims to honour a crew that rowed in the Head of the River Race, but of course the Oxford Blue Boat competes against Cambridge in the Boat Race, which is a completely different thing.

None of the names for the crew correspond to the members of the actual 1932 Blue Boat, and as far as can be ascertained, none of them was even at the university. That did not stop the forgers throwing in a President and a Captain, neither of whom was in the crew. Their names are duly inscribed below the crossed oars with their glorious, and entirely incorrect, yellow trim on the dark blue spoons. All this is for the taking for the princely sum of US$1,500!

Perhaps, the most delicious detail of this fake is that the crew somehow won the Diamond Sculls as they were racing the in the Head of the River Race. I suppose it would be hard for even the most prodigious sculler to compete with an eight, but what would Henley’s venerable Stewards have to say?

Just as interesting, the article is offered by a fine art dealership that proclaims: “Our passion not only lies in buying, selling, appraising and in consignment, but in history. We will discover the history that lies within every brushstroke stroke from every piece that comes our way; we will discover how an artist or a particular piece of art affected a generation or helped define a time in history.”

How could such an obvious fake make its way past their eagle eyes? A quick Wikipedia check of the crew names would have revealed this article’s provenance undoubtedly lay in the Eighth Circle of Hell.

Elsewhere on eBay there are “authentic” Oxford varsity rowing oars painted white with red tips, which fall well short in length of the 12 ft or so one would expect for a sweep oar. 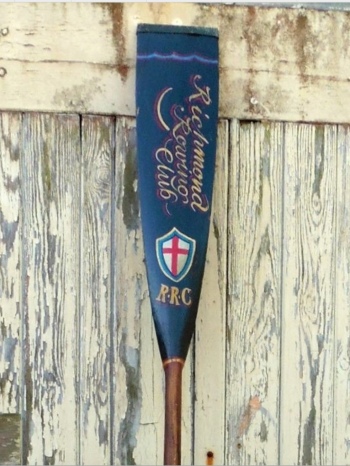 Oxford is not the only attribution given to fakes. HTBS’s redoubtable Tim Koch found a “Richmond Rowing Club Trophy Sculling Oar” on eBay coming from an entirely fictional rowing club (on the right). That didn’t stop them asking £420 for the fake.

The fakes don’t end with oars. The same vendor offered a life preserver emblazoned with the words “Henley Rowing 1912”.

eBay seems either unwilling or incapable of reining in the sale of fake rowing memorabilia, or indeed fake memorabilia of any sort.

Should we worry, or merely say that this is a case of caveat emptor? As a genuine collector of items of rowing history, should I even be pleased that such things are on the market, as it creates less competition for those items that are genuine and significant?

The counter argument is that the sport of rowing as a whole is diminished when people who might like to support it, however vaguely, are defrauded by forgeries such as these. As people who truly love the sport of rowing, we also have a duty to protect these buyers from unscrupulous sellers who would exploit them.

And just as the art world is undermined whenever a fake painting masterpiece changes hands, so too the history of our sport is reduced when fake rowing memorabilia is sold.