Göran R Buckhorn is looking at some women’s legs again:

In the early 1920s, girls and young women began rolling down their stockings below their knees (like the girls in the picture on top) just to make a point that their knees were bare. Before and during the First World War, it would be impossible for a woman to leave her home without having her legs covered with silk or rayon stockings, or sometimes cotton stockings, though the latter were not consider fashionable.

Even songs were written about the rolled stockings:

Listen to the song here:

The ‘rolled stockings’ were popular among the so-called Flappers, who Wikipedia tells us:

….were a ‘new breed’ of young Western women in the 1920s who wore short skirts, bobbed their hair, listened to jazz, and flaunted their disdain for what was then considered acceptable behavior. Flappers were seen as brash for wearing excessive makeup, drinking, treating sex in a casual manner, smoking, driving automobiles, and otherwise flouting social and sexual norms.

Flappers were also rowing on the River Thames which is shown in the following short clip (without rolled stockings; but famously porky Bossie Phelps is helping them out on the water):

You will find a large number of newsreels from the 1920s about ‘flappers’ on YouTube! 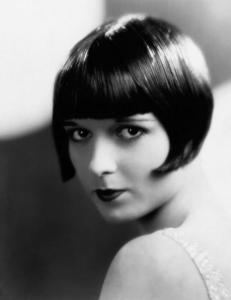 One of the 1920s most famous flappers was the American actress Mary Louise ‘Brooksie’ Brooks (1906-1985), whose father, Leonard Porter Brooks, was a lawyer and her mother, Myra Rude Brooks, a talented pianist. Dancing at an early age, Brooks left her home town in Kansas at age 16 and moved to Los Angeles and then crossed the pond for a stint at Café de Paris in London. When she returned to the United States, to New York, she joined the Ziegfeld Follies on Broadway. With great talent and intriguing personality, Brooks soon got calls from Hollywood and from the mid-1920s she began making silent movies for Paramount Pictures. Her first film was The Street of Forgotten Men (1925), an uncredited role. Brook’s beauty and talent soon gave her leading roles in films such A Girl in Every Port and Beggars of Life, two movies which were both filmed and released in 1928. She would become a trend setter for women – flappers – with her bobbed hair style. The English theatre critic and writer Kenneth Tynan featured her in a 20-page essay, “The Girl in The Black Helmet”, in the magazine The New Yorker on 11 June 1979.

One of her friends was the actress Clara Bow, who during the 1920s was known as the It Girl. According to Brooks, Bow was not acceptable socially. Brooks once said: ‘Eddie Sutherland, my husband, gave absolutely the best parties in Hollywood. So I asked him one day to invite Clara Bow and he said, “Oh, good heavens, no! We can’t have her. We don’t know what she’d do. She’s from Brooklyn”.’ Another friend was Martha Graham, about her, Brooks once said: ‘I learned to act while watching Martha Graham dance, and I learned to move in films from watching Chaplin’.

However, Brooks found the norms of Hollywood boring and being independent she rebelled against the restrictive role of the American woman and went her own way. She broke the contract with Paramount and went to Germany where she was cast as Lulu in the Austrian director Georg Wilhelm Pabst’s Pandora’s Box, a film based on two erotic plays. The role as Lulu was initially thought of for Marlene Dietrich, but Pabst gave Brooks the role without even having met her. This movie, shot in 1928 and released the following year, came to be her most famous film – in future movies, Brooks would forever be compared to her role as Lulu, a femme fatale not afraid to show her sexuality. Pabst also starred her in his Diary of a Lost Girl (1929). The following year, Brooks went to France to film Prix Beaute [Miss Europe] (1930) by Italian director Augusto Genina. This movie came in a way to be her first sound film although both her dialogue and singing were dubbed – a pity as Brooks really had a beautiful voice. All three of these European films were heavily censored due to their ‘adult’ content (though, not maybe what we today would call ‘adult movies’).

In 1931, Louise Brooks returned to Hollywood and was cast in a couple of movies. She was offered the female role in The Public Enemy (1931) with James Cagney, but she turned it down. She made one more film that year, Windy Riley Goes Hollywood, which was directed by Roscoe ‘Fatty’ Arbuckle, who was a Hollywood outcast at the time, working under the pseudonym ‘William Goodrich’. About Arbuckle/Goodrich, Brooks said:

He made no attempt to direct this picture at all. He just sat silently all through the three days of filming in his director’s chair like a dead man. He had been very nice and sweetly dead ever since the scandal that ruined his career. But it was such an amazing thing for me to come in to make this broken down picture, and to find my director ‘William Goodrich’ was in fact the great Roscoe Arbuckle. Oh, I thought he was magnificent in films. He was a wonderful dancer… a wonderful ballroom dancer, in his heyday. It was like floating in the arms of a huge donut… really delightful.

In 1932, Louise Brooks declared bankruptcy and to survive she began dancing in nightclubs. She made a comeback in 1936 and made four more movies, the last one in 1938, the B Western Overland Stage Raiders, opposite John Wayne. All and all, she made only 24 movies.

Back to the flappers’ rolled stockings: in a comedy film from 1927, Louise Brooks was cast as ‘Carol Fleming’ in Rolled Stockings, which was directed by Richard Rosson. Rolled Stockings is nowadays regarded as a ‘lost film’, as there do not exist any known copies of the film, only some promotion still pictures – six of her movies are regarded ‘lost’. What might interest the HTBS readers is that Rolled Stockings is a ‘rowing movie’, and as such so rare that it is not even mentioned on the list on The Rabbit’s Guide to Rowing Films or Row2k’s list Rowing in the Movies.

There exists a brief synopsis of Rolled Stockings on the web:

Jim Treadway disappoints his father in not making the boat crew at college while his freshman brother, Ralph, makes the team and upholds the family tradition. Both boys are smitten, however, by the charms of Carol Fleming, but Ralph is handicapped by hazing and strict training rules. On the eve of the big college race, Jim takes Carol to a dance and leaves Ralph burning with jealousy; deciding to brave official disapproval, Ralph goes to the dance and takes a jazzy young blonde to a roadhouse. Jim follows and ejects his brother after a fight and is himself found with the girl. After being acclaimed a hero, Ralph confesses that he is to blame for Jim’s disgrace, and Carol finds happiness with the older brother.

After her film career was over, Louise Brooks had a hard time to make ends meet. She opened a dance studio, which faltered, worked for half a year doing radio soaps, took up the pen to become a gossip columnist and then a salesgirl in a store in New York City. However, she got a second career as a writer, thus penned some witty essays on films and authored several books, including her autobiography Lulu in Hollywood (1982).

In the 1950s, her films were rediscovered by French film historians and French film archivist and cinephile Henri Langlois remarked: ‘There is no Garbo! There is no Dietrich! There is only Louise Brooks!’ She was married twice but took many lovers. She had an affair with Charlie Chaplin in the summer of 1925, when she was 19 and he was 36. Brooks also admitted to having a one-night stand with Swedish actress Greta Garbo, whom she said was a ‘charming and tender lover’.