In the latest issue of WoodenBoat (January/February 2016), in the section “Across the bar”, the magazine writes that Darryl J. Strickler has passed away at the age of 73. He died at the oars on 12 October when he was on his daily outing.

Strickler, who was born 12 August 1942 in Coatesville, Pennsylvania, started sculling and building boats at the age of 12. To rowers around the world, he was forever connected with wooden racing and recreational shells. He literally owned hundreds of wooden boats and oars, and his knowledge of these wooden craft, built by boat builders and oar makers in the USA, England, Canada, Germany, Italy and Switzerland, he shared in his famous book Rowable Classics (2008), which I wrote about on HTBS on 7 September 2009, read the article here.

I had the great pleasure of meeting him in the summer of 2009 at the WoodenBoat Show at Mystic Seaport in Mystic, Connecticut. He was a kind man who was happy to talk about wooden boats to anyone who crossed his path, as he was also happy to teach numerous people how to scull and how to take care of a wooden shell. It was as he wrote in Rowable Classics: “But wherever you row: Row Wood!” 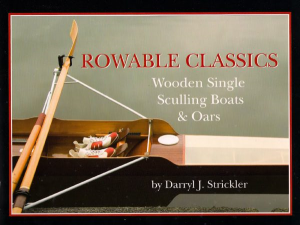 If you would like to read more about Darryl Strickler and pay tribute to him, go to rowwoodforever.com