French sculptor and wood engraver René Quillivic (1879-1969) was born into a fishing family of modest means in Plouhinec, South Brittany.

As an apprentice carpenter, he attended night classes at the École Boulle in Paris, studying sculpture, and came up to the École des Beaux-Arts thanks to the support of a local statesman. Quillivic exhibited at various Paris Salons: des Artistes Français, de la Société Nationale des Beaux-Arts, des Indépendants and d’Automne. Despite the large presence at the Salons in the French capital, Quillivic’s art remained rooted in his native Brittany.

René Quillivic has been associated with the imagery of pain since he has created the designs of many war memorials, honouring the fallen soldiers of the First World War. Besides his sculptures, he exhibited many woodcuts, among them these pieces showing whaleboats. Quillivic was a very successful artist and the French government commissioned many of his works. The sea inspired him a lot, just like other Breton artists. 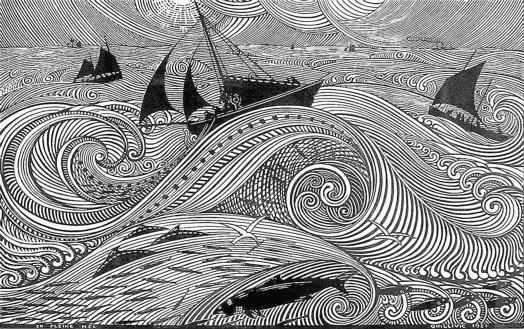 Part of his work reflects an Art Deco elegance, as well as the influence of Japonism, with a rhythmical representation of a tumultuous sea as in the “La vague”, illustrating a whale boat. He captures the threatening dimension of the waves by depicting spirals and winding lines, which are also reminiscent of Celtic patterns.

In the 1920s, he played a tremendous role in Brittany’s art revival. After the Second World War, Quillivic appeared as the symbol of Breton invention, as the modern Breton sculpture’s forefather.