A Regatta to Di for

The spa of Aix-les-Bains and the medieval town of Chambéry were salutary places to experience the unfolding of a World Championship on the exquisite lake of Aiguebelette in 1997, writes Christopher Dodd:

START
The 1997 World Championships in Aiguebelette began badly for the Brits. The team travelled to France reformed and full of hope. Steve Redgrave and Matt Pinsent’s 1996 Olympic gold medal claimed on Lake Lanier was the only gold medal won by Britain in any sport in Atlanta. Period. The great sporting nation was shocked, and the government coughed up some funds when it awoke from the nightmare. Rowing, as the only sport to deliver, received a fistful. 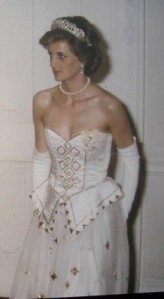 By the time the boat trailers rolled into France, former headmaster David Tanner had been appointed Oberführer. There were six full-time coaches attached to the programme, including talent spotters for juniors and under-23s. Redgrave was going for his fifth Olympic gold in a new four – the same Redgrave who in Atlanta had invited anyone to shoot him if they saw him in a boat again. Greg Searle, the 1992 coxed pair champion, was embarking as a single sculler. There was a squad for a men’s eight under Martin McElroy. Mike Spracklen was chief coach for women and Redgrave’s coach, Jürgen Gröbler, was in charge of the men.

They were ready to throw down a gauntlet for Sydney in three years’ time, with a target of two golds for men and one for women in 2000.

In the early hours of August 31 – the day rowing started – I awoke in my hotel room and dispatched my dinner down the toilet. I eventually crawled back to bed at 3 a.m. and switched on BBC World. A solitary newscaster repeated an unverified report that Princess Diana had been injured in a car crash. I was riveted to the screen for three hours, by which time the People’s Princess had been pronounced dead. So had her companion, Dodi Fayed, and her drunken driver, Henri Paul.

A feeling of disbelief settled like mist over the lake that day, while back home an extraordinary emotional quake sent aftershock after aftershock up and down the country. The railings of Kensington Palace became the focal point for grief at the terrible event in a Parisian underpass. As a carpet of flowers spread and tributes poured in, the royal family were slow to react to the death of their divorced and disaffected daughter-in-law. Tony Blair, the young Labour Prime Minister elected in a landslide on May 2, had to remind the Queen of the place Diana held in the nation’s heart. The royals were at their lowest ebb. For the first time more than half of those polled by opinion seekers expressed preference for a republic.

In Aiguebelette, the President of British rowing, Martin Brandon-Bravo, was a cat on a hot tin roof. When it became clear that Diana’s funeral would coincide with finals day, he was of a mind to withdraw the British team. But after calls to London and consultations with officials, sanity prevailed. Martin and his wife Sally set about making bows of black ribbon for the athletes to pin to their strip.

I contributed daily reports on the championships to The Guardian, but what sticks in my mind most is the beautiful setting, the toy train that conveyed journalists from the Media Centre to the grandstand, the cliffs and sunshine, and entertaining conversations in the hotel with the Rev Ewan Pinsent, father of Matt, the oarsman (the course and facilities at Aiguebelette have been re-designed since 1997).

I recall a five-star dinner hosted by GB’s sponsors, Lombard, and their wonderful PR Olivia, at which Geoffrey Page, scribe of The Daily Telegraph, god rest his soul, conducted a fierce argument with the patron about the quality of his cellar. Rude but ill-advised rather than smooth.

FISA’s media commissioners (of whom I was one) entertained their chairman Paul Kölliker to a farewell dinner in Aix-les-Bains. Kölliker had been forced to resign because of a conflict of interest. That is, he had written something for his newspaper that was unpalatable to some on FISA’s council (i.e. the president and the blazerati). The renowned diary writer of Regatta magazine, Hammer Smith, regretted his going because he is a master of innuendo and has an extensive archive of Swiss and Austrian jokes that had kept FISA in fits for years. I’m afraid no examples are printable. Kölliker is an imposing figure, so tall that his stature is in danger of impeding his ability to take part in his other passion, which is riding mules in the mountains. His legs are longer than a mule’s.

Smith also reported that the media commission would be in the hands of Dutchman, Marc Top, a brilliant mimic of blazerati, who could (and still can) speak Double Dutch in five languages (one being ‘Fisaspeak’), simultaneously. Sadly, the media commission, several of whose members were in at the start of the Friends of Rowing History, is no more.

The official press outing led many of us to resolve never again to accept an invitation involving a cruise. Two steamers embarked for an evening of drinking and eating. The rain pelted down to keep everyone crammed below decks, and the booze ran out in barely an hour. It was 11 p.m. before we were transferred to another boat for dinner – having cruised on lake and creek past several mouth-watering restaurants. What made it worse was that I was sitting next to the region’s minister for tourism who repeatedly sought endorsements for his enterprise. I’m afraid that although I could commend his scenery, I had to tell him that he couldn’t organise a piss-up in a brewery.

I’m afraid I’ve digressed. We British journalists were glad to be in Aiguebelette, at a distance from the mourning for Di, which by the end of the week had brought our country to a standstill of disbelief. Half the world tuned in to her extraordinarily moving funeral, while on the lake, blades flashed on blue waters in pursuit of medals.

The athletes dutifully wore black ribbons and bowed heads on the podium. I think the British flag was only raised to half-mast. They made a good start to their Sydney campaign. The new ‘dream team’, men’s four, won gold (James Cracknell [bow], Steve Redgrave, Tim Foster, Matt Pinsent), matched by the women’s four (Susan Walker, Alex Beever, Elisabeth Henshilwood, Lisa Eyre). Miriam Batten and Gillian Lindsey won silver in the double sculls. The lightweight men’s eight also won silver, and Greg Searle took one of four British bronze medals (the others being the M4+, W8+ and LW2x). Three years on in Sydney, the men’s four and eight won gold and the women’s quad silver.

Another notable result at Aiguebelette belongs to Michel Andrieux and Jean-Christophe Rolland of France in a storming golden finish in the pairs. Rolland is, of course, now the president of FISA.

PS: There was feisty Oxford and Cambridge Boat Race in 1997 in which Cambridge clinched a fifth consecutive victory after aggressive steering and a couple of clashes. The 50-year-old international rugby star Andy Ripley trialled for the Light Blues but missed the cut. Ed Bellamy, Oxford’s president, de-selected himself from the Blue Boat and rowed in the reserves at the behest of coach René Mjinders. Cambridge were steered by the immensely talented Kevin Whyman who was killed on 1 August this year when the Folland Gnat he was flying crashed during a display at Oulton Park, Cheshire.